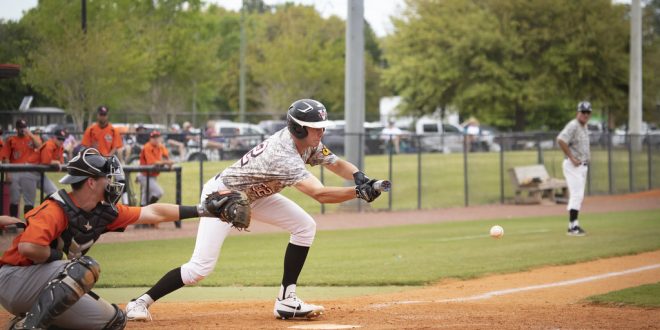 The Blazers next matchup will be against Saint Leo on April 9.

Tuesday my 2 p.m. to 4:15 was cut short an hour, allowing more free time for the rest of the day.

It was a partly cloudy 63-degree day, so I decided to step out of my element and attend the baseball game as the Blazers faced Augusta University at Billy Grant Field.

Throughout my three years at VSU, I never attended a baseball game until Tuesday and felt like it was time to change that.

I had to do some studying before going to the game, so I didn’t make it to see the first pitch at 4 p.m.

Once I completed my studies, I got on the VSU Red Shuttle and headed to the Billy Grant Field at Tommy Thomas Park.

I arrived at the bottom of the first inning, meeting up with Editor-in-chief Juston Lewis and Social Media Editor, Joshua Miller.

I thoroughly enjoyed my time at the game, from the home runs, to the listening to the Blazer’s at-bat walk up music, and the crazy fan in the bleachers.

My favorite play had to be the homerun to left field by Josh Broughton in the bottom of the third.

Broughton made a good first impression on me as he went 4-4, scored three runs, and had three RBIs.

From a person that hasn’t participated, let alone watched baseball since playing recreational at my local YMCA as a child, I would say he was the most outstanding player in the game.

Though the fans were quite silent unless a play favored the Blazers, there was one fan out there who convinced a Blazer, Mike Christopoulos to attempt to steal third base.

The steal attempt didn’t fall through but seeing how quiet the fans were, there’s no doubt in my mind that Christopoulos was influenced by the fan and decided to make a run for it.

One of the most amusing sequences on Tuesday was the walk-up music.

Some players music was better than others, but Mack Hathcock took the cake for the best song as he prepared to bat as Future’s “Goin Dummi” played in the background.

The Blazers took the win, prevailing 11-4 on Tuesday.

All-in-all, it was a delightful experience watching the Blazers play for the first time while dodging foul balls that jumped the net.

I got outside of my element and was richly rewarded with a pleasurable time.

I’m intrigued by the Blazers after attending my first baseball game and shall return to Billy Grant Field in their next matchup against Saint Leo on April 9.