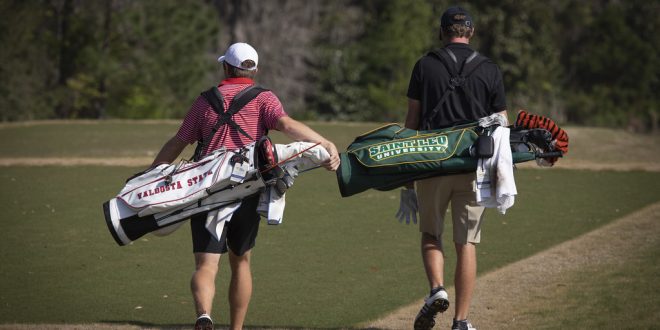 Gage Smith finished No. 6 in the tournament.

For the first time in my year of VSU golf coverage, I didn’t know what place the Blazers came in.

It soon came to my attention that top player Matt Anderson and Sophomore Wesley Hanson had both withdrawn from the field at the Argonaut Invitational Tuesday. Anderson decided to at Pensacola Country Club’s driving range, while Hanson did so on the second hole.

This is the only time that such a circumstance has occurred since Purvis began his tenure in the fall of 2002.

Hanson and Anderson got sick the night before, and it continued to get worse.  While they both attempted to play the next morning, Purvis said that neither of them “were able to compete.”

Because of their withdrawal, the Blazers had less than the required four scores for the third round, making them unable to place in the tournament.

“We all just played as individuals after Wesley and Matt withdrew,” Healy said.  “It was still a college tournament, so we continued to treat it like one.”

On the bright side, Gage Smith accomplished a first of his own, cracking the top ten in a college event.  His 6th place finish came in large part because of his play off the tee and the fact that he hit 42 out of the 54 aerated greens in regulation.

After firing a first round 74, Smith went back to Hole 11, the place where he had begun the day, and proceeded to birdie five of his first six holes in Round Two.

“Nothing spectacular happened,” Smith said.  “I just took advantage of the easy holes and hit some really good shots on the harder ones.”

While he got hot for that stretch of holes, the parade of birdies didn’t last after that, making a bogey on 17 and two more on Holes 2 and 3 after he made the turn.

“I was just trying to keep letting it go as low as I could, but the putter went cold on me,” Smith said.

Still, the freshman turned in a 2-under par 70, only two shots higher than the low round of the second 18 posted by Andre Jacobs of Arkansas Tech.

On Tuesday, Smith posted an even par 72, making him the low Blazer in this event, the last time and only other time being when he shared that feat with Anderson at the Copperhead Championship in October.

“It’s pretty cool to be the low man always, but I just always try to play my best each week to help my team,” Smith said.  “This week, it just happened to be a lot better than the weeks in the past.”

In his last two appearances, Smith had come in 50th at Kinderlou and 63rd at Cuscowilla.

Healy finished tied for 29th in his return from a wrist injury.

Like Smith, the freshman didn’t get off to an ideal start in Round One.  Beginning his day on 10, the Norcross native played his first four at 4 over.

“I knew there was a lot of golf to be played after that bad start,” Healy said.  “I knew I could easily get it back.”

He got one of those shots back with a birdie on the par 5-14th.  From there, he went even par for the remainder of what he called “ a stress free golf round.”

In the midst of this, Healy “figured out a golf swing to get the ball in play.”  He was 2 over-par over his last 50 holes.

Dalton, Georgia’s Davis Smith matched Gage’s score in Round One, but followed that up with a pair of 80s to put him in a tie for 76th.

Anderson was at 5 over, one shot behind Healy through 2 rounds, prior to withdrawing.  With back-to-back birdies on 14 and 15, his strong start put VSU in the thick of things early Monday morning.

He ended his first round with arguably the toughest trio on holes on the course, going 4 over on Holes 6, 7, and 8.

Anderson responded with a birdie on his opening 9th in Round 2, however, making five birdies in Day One.  He played his last three at only 1 over the second time around, turning in a 74 for his final round of action.

Hanson was in a tie for 72nd after Day One.   Starting on 10, he bogeyed five out his first six holes, a birdie on 14, but went even par the rest of the way, going bogey-birdie at two different places.

In Round 2, Hanson walked off 16 green at 2 over for the tournament, but went on to post a 3 over-par 75 for a 7 over total for his only two rounds.

The implications of this result are uncertain, but Purvis said the team will keep working and will prepare for the Gulf South Conference Tournament, held at Robert Trent Jones’ Magnolia Grove in Mobile, Alabama on April 14th through 16th.

The Blazers were in 8th after two rounds, ahead of now No. 7 Florida Southern, No. 19 St. Leo, and 26 Columbus State.

Importantly, they were trailing Lee, another Region contender, who has now moved to No. 25 in the referenced GolfStat rankings.  They will also be in the field at RTJ Magnolia Grove.

No. 3 West Florida successfully defended their home turf, winning the event by 14 shots over now No. 12 Limestone College.

Their No. 1 player Christian Bosso won an event that wasn’t over until the final holes Tuesday.  With Bosso at 8 under for the tournament though eight holes on Tuesday, Limestone’s Brett Krekorian, even for the day at the time, provided a late rally, where he made four birdies in a row to match Bosso’s mark.

Bosso made three birdies on the back nine to beat Krekorian by two and win for the third time this year.

Gage Smith cited cold and windy conditions to go along with the greens having holes punched in them.