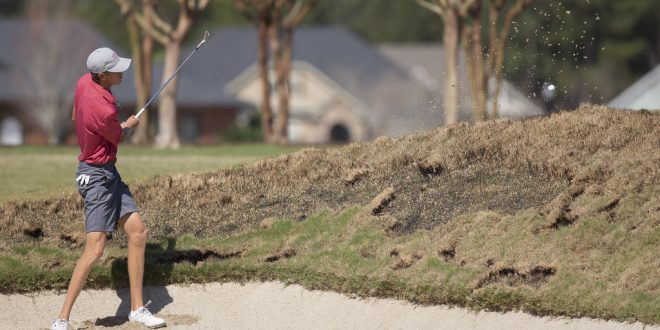 VSU will bring with them one of the top players in the field, UIS Island Getaway winner Matt Anderson, who is putting together another all-conference-type season.

Robert Trent Jones has designed or lent a hand in the layout of over 500 golf courses worldwide.

On April 15-16,  none will play a more prominent role than Crossings at Magnolia Grove, where the VSU Blazers hope to win the Gulf South Conference Tournament.

The first architect inducted into the World Golf Hall of Fame, Jones studied landscape architecture, civil engineering, and agronomy at Cornell University, before putting his name on so many of the game’s great venues including Baltusrol, Bellerive, Congressional, Hazeltine, Spyglass, Oak Hill, and Oakland Hills, the “monster” that Ben Hogan “brought to its knees.”

A contemporary of the great amateur Bobby Jones, he made use of the middle name “Trent” to eliminate confusion.  RTJ helped the former by redesigning Augusta National’s 11th and 16th holes, the latter being the site of Tiger Woods’ famous 2005 Masters chip-in.

Later in life, he signed the largest golf design contract ever when commissioned to created 18 public courses in the state of Alabama.

One of them, located in Mobile, will host the Blazers’ next event.

The designer is known for his use of water, large bunkers, and undulated greens; Crossings is no different.

“I’ve heard the greens are big with lots of slope, so speed will be a big factor on putts,” Smith said.

While the fairways may be generous, according to the freshman, the course will certainly challenge the players in respect to iron play, in addition to putting.  16 of its greens are guarded by bunkers.  The exceptions are Holes 14 and 15, where dangerous water takes their place.

A lake also sits between the players’ approach and the green on the treacherous 5th.

VSU will bring with them one of the top players in the field, UIS Island Getaway winner Matt Anderson, who is putting together another all-conference-type season.  He should be listed on the All-GSC team for the third time following this event.

As always, the trio of freshman will be joining him, that group first bursting onto the scene at the Country Club of Columbus.

Within that group, Brock Healy looks the part of GSC Freshman of the Year.

He trailed only Anderson in Puerto Rico and had a strong 7th-place finish at the St. Leo Invitational.

In his first appearance since his recent wrist injury, Healy “felt good” at the Argo Invitational last week and should feel even better in this event.

Gage Smith had his best finish of the year and in his young career at Pensacola Country Club, leaving a positive impression after struggling a little prior to that.

Despite it being their first rodeo as far as conference tournaments are concerned, Davis Smith, the third member of the group, feels confident about the three of them heading in.

“I personally feel like the trio is starting to heat up,” Smith said.  “Gage has been playing some great golf and so is Brock.  I’ve put in a lot of work since our last tournament, and I really like where my game is at.”

Completing the lineup will be last year’s GSC Freshman of the year, Wesley Hanson, who has played a larger role on the team as of late.  In four events, the sophomore has a 75.30 scoring average.

West Florida is the No. 3-ranked team in the country, and all evidence suggests that they would be chosen as the favorite if experts conducted a poll.  The Argonauts have won two events this season, including their home event.

Christian Bosso, their top player, has won three times this year individually.  GolfStat has him as their No. 4 player nationally and would get my vote for conference player of the year if all ended today.

VSU was ranked No. 9 in the South Region Rankings on Friday. Translation: they would be in the hypothetical postseason field.

With only this tournament remaining, and a berth on the line, the Blazers have no change in mindset.

“We are going to have the same mindset for this tournament that we do every tournament,” Smith said.  “We just have to hit fairways and greens and keep giving ourselves chances.”

A win in this tournament would grant whichever team an automatic bid into the NCAA field.

Previous ‘It’s not cheap, it’s free’: Grace Cafe provides a comfy refuge for students
Next Column: The interest will be high for Helfer