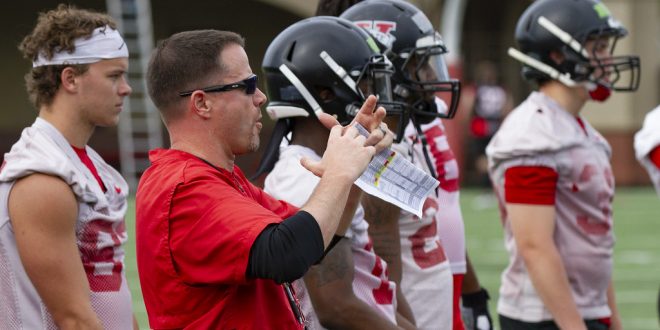 The Blazers 2019 preseason will begin Friday, Aug. 9 at 8 a.m. at Athletic Field House.

Takeaways from the Blazers’ first scrimmage

The 2018 national champion Valdosta State Blazers took the practice field this morning for their first team scrimmage and after a hot hour and a half of playing, three things stood out to me from the defending champs.

The air raid offense is a scheme Head Coach Gary Goff is very fond of and is implementing it to his team. The first play was a great demonstration of what his scheme will bring, and that’s playing aggressive with speed.

Quarterback Rogan Wells took a deep shot down the right sideline for about 35 yards. Although last year’s offense was fast and aggressive, Goff’s air raid will call for the same but with more deep throws than people saw last year.

Here’s what Wells had to say about the new system:

“I like it a lot. He puts a lot of control in my hands and there’s a lot of one on one matchups that I think our receivers could win, so that’s why we’re doing a lot of deep balls and just giving the receiver a 50-50 chance and hoping they come down with it.”

Wells continues to progress with experience even after finishing 2018 as arguably the most valuable player in the nation. He’s showing more composure and confidence on the field, and after interviewing him since his freshman year, he’s even handling the media with more swag than ever before.

He looks the part, sounds the part, and acts the part. Just from watching Stalker throughout the Spring, he brings a level of energy that’s contagious and is always dictating what he wants from his players.

Stalker’s image is robust, and it’s starting to show through his defense

VSU’s defense executed well throughout the scrimmage despite missing some players and working with new guys that didn’t see the field much last year.

The Black Swarm deflected multiple passes, forced a fumble, and ended the scrimmage with an interception. It’s safe to say that the Swarm will continue their work from last year, or even improve from it.

Those are the two words Goff used to describe VSU’s Spring practices. Even though new schemes are being introduced to both sides of the ball, it appears that the players aren’t just buying in, but embracing it.

“I was really excited to come out here and play,” Wells said. “I see a lot of energy, which is really good. Coming in with new coaches, you might not like the system but we’re really learning it and putting in the extra time to really understand it, and I think we’re doing really well picking it up.”

Offense and defense came out eager to play and get a feel for an actual game, and that eagerness may stem from how both Goff and Stalker are carrying themselves and coach this team.

Compared to last spring, the practices have higher energy and it radiates off the players.

“I feel like we’re definitely a lot more hype, we have a lot of energy on the sideline,” said Mozone. “It doesn’t just fall on one person, it falls on everybody, and that’s how we keep it up. We transfer the energy on the field, make plays, and do what we do.”

The first scrimmage showed a lot of high points and even though it’s early, these first couple of weeks of Spring practice should already have people excited to see more of this team.