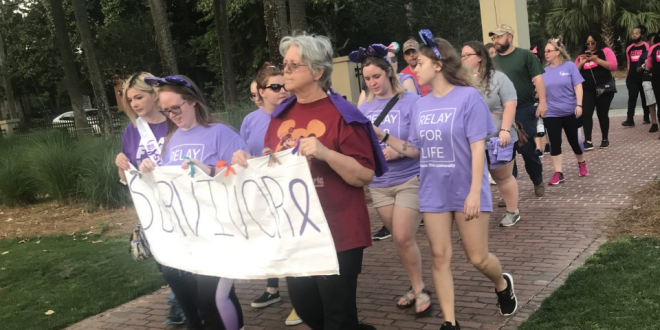 Relay for Life kicked off with a heartfelt speech from cancer survivor Melanie Benson. She walked everyone through her life and why she continues to participate in Relay for Life every year.

Benson has been relaying since 2016. She said she chose to come to VSU to participate in Relay for Life because her daughter is a VSU student.

“[My daughter has] been relaying since she was nine years old, so […] she’s supported me with my cancer,” Benson said.

Benson hopes that her story shows students the impact Relay for Life has. She wants them to see how it helps survivors, remembers those lost at battle

Relay for Life continued with the survivor lap, where all survivors and participants walked around the front lawn to signify their victory in the battle against cancer.

The event ran into the night with fun events like Zumba, a twirler performance and a mini pageant where men dressed up as Disney princesses and villains.

The Luminaria ceremony occurred towards the end of the event. White paper bags lit up the dark night and gave tribute to those who have passed.

The event ended with the closing ceremony, which recognized all Relay for Life volunteers for their hard work and welcomed exec board members to the stage to explain why they relay.

Tiffanie Sherlock, vice president for Relay for Life and a senior psychology major, said that she has participated in Relay for Life since she was young.

“I lost my great grandmother to cancer, so we always grew up going to Relay,” she said. “It’s a very close, dear thing to my heart.”

Sherlock said that Relay for Life has been successful this year because they built a great leadership team to help organize the event.

“Our team is a little smaller because we wanted more people who are excited for Relay and it’s more personal to them,” she said. “Everyone who’s on our leadership team has a personal connection to cancer, so that’s what makes it special for all of us.”

Sherlock also said that her goal for Relay for Life next year is raising more money than the year before.

“We just wanted to grow bigger and better every year. This year we had more teams and more participation than last year,” she said. “Our goal is to raise more money than we had last year […] by adding one more team.”