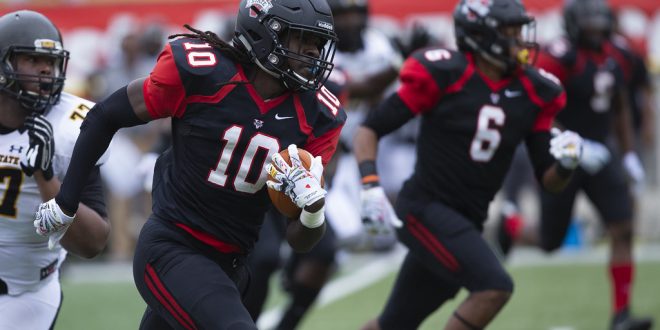 Denmark will have the highest chance of making an NFL roster.

The NFL Draft is where dreams begin, and that is no different for three former Blazers.

Selected with the no. 238 pick in the seventh and final round of the draft, corner back Stephen Denmark begins what — he hopes — will be a long career with the Chicago Bears.

He becomes the first Blazer drafted since 2013 when Edmund Kugbila was drafted by the Carolina Panthers.

Denmark wasn’t viewed by many NFL teams before the season, as he had just changed positions from wide receiver to cornerback before his senior season.

However, he ended the season as a second-team All-GSC award winner, finishing the season with three interceptions, nine pass breakups, and eight tackles for loss.

He added 55 tackles from the defensive backfield while helping VSU win the national championship.

Where Denmark really began to stand out was at his pro day workouts, where his immense size (6’3” tall and 220 pounds) and great workouts really stood out to a lot of teams, and earned him multiple team workouts.

His forty yard dash time (4.47 seconds) and vertical jump (43.5 inches) had him rated as one of the most elite athletes in the entire draft.

The former track star projects as a long term project in the NFL, as he continues to learn the defensive side of the ball.

The NFL has continued to evolve and defenses are looking for bigger cornerbacks to defend the longer wide receivers, which Denmark fits that mold.

For the next season, however, you can probably expect Denmark on special teams coverage for the Bears, as they had one of the best defenses in the league already.

Teams will always look to put some of their best athletes on special teams to cover as much ground to make tackles.

Jegede led the Blazers with five and a half sacks his senior season and is considered an intriguing pass rushing prospect.

Both will look to battle during training camp to earn roster spots for their respective teams.