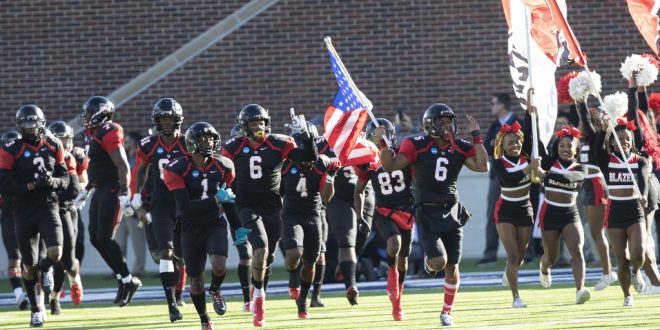 The Blazers defeated Ferris State 49-47 on Dec 15 to win fourth national championship. In 2019, the Blazers will be featured twice in the conference game of the week.

The VSU Blazers football team will be featured twice this season for the Gulf South Conference Game of the Week, the league office announced on Aug 6.

Then, they will face West Georgia in Carrollton, Georgia for the Old Peach Bucket on Nov. 16 at 7 p.m. on ESPN3.

ESPN will serve as the carrier of the league’s package for the sixth straight season.

This year’s schedule will feature one GSC game every Saturday from September 14th through November 16th.

“The Gulf South Conference maintains the longest running game of the week programming in Division II with this renewal with ESPN,” GSC Commissioner Matt Wilson said in a release. “The digital platforms that ESPN provides will place the best football in Division II alongside other great games across the country each week. We are excited to collaborate with the premier sports media organization in the college market.”

The Blazers come back home to host Ohio Dominican on Sept. 14 at 6 p.m. at Bazemore-Hyder Stadium for the 2019 home-opener.

Previous Curiosity killed the student
Next Fall Meet the Blazers set for Aug. 22