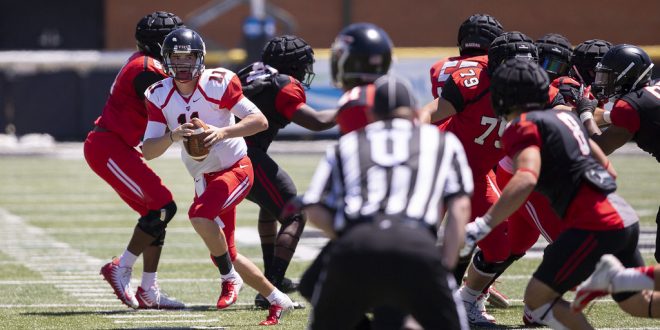 Rogan Wells (11) looks downfield to make a pass in a spring football scrimmage.

Blazers voted No. 1 in AFCA poll for fourth time

After a historic, perfect 14-0 season and a 49-47 victory over Ferris State in the national championship game in McKinney, Texas, the Blazers moved to first among Division II coaches.

Below is the full poll. Note the fifth column is the 2018 AFCA ranking for the respective program:

The Blazers have now been ranked No. 1 in the preseason poll in the history of the AFCA Division II poll for the fourth time.  VSU was ranked at the top of the AFCA preseason poll each of the years following their national championship victories (2005, 2008, 2013 and 2019).

VSU will open the season on the road against Albany State on Sept. 7 at 7 p.m. They return home for the 2019 home-opener against Ohio Dominican on Sept. 14 at 6 p.m.