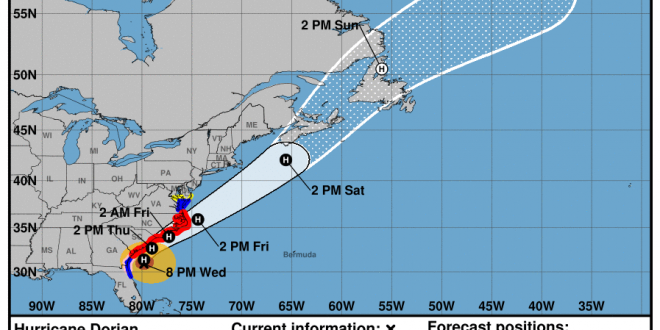 After ripping through the Bahamas and leaving many people devastated as a category 5 storm, Hurricane Dorian is making its way up the East Coast.

Even though the Bahamas were left in ruins and many areas on Georgia’s coast are expected to feel the impacts from Hurricane Dorian, the Lowndes County area is not expected to get hit by the storm.

“Hurricane Dorian’s rain bands have weakened, leaving a real possibility that we will receive little to no rain during this event, according to public safety officials,” says a press release sent out by VSU’s newsroom.

Because of this, Valdosta State University has decided not to cancel classes. University officials have however ensured students they will continue to monitor the storm and make any decisions they feel would keep the students safe.

Not only has the rain chance weakened, but also Valdosta is well over 100 miles west of Georgia’s coast, that residents in Valdosta and University officials are not expecting to feel the effects of Hurricane Dorian.

While Valdosta will likely not get hit by Hurricane Dorian, that is not the case for many cities along Georgia’s coast.

Those coastal areas are expected to start experiencing some bad weather in relation to the storm on Wednesday night and early Thursday morning.

Some universities closer to the coast such as Georgia Southern, and College of Coastal Georgia have even decided to cancelled classes and operations until later in the week.

Despite some residents stocking up on gas and water, the city of Valdosta and the Lowndes County area are not expected to get hit or feel drastic effects from Hurricane Dorian.

Surrounding cities such as Tifton will also likely not be impacted by the hurricane.

According to a press release from Georgia’s Department of Defense, over 200 Guardsman from the Tifton-based 110th Combat Support Sustainment Battalion have been sent to the coast to help with logistics and law enforcement.

Even though Georgia’s coastal areas are expected to get hit by Dorian Wednesday night and Thursday Morning, the National Hurricane Center reports that the storm is slowly but surely moving north east toward the Carolinas.

Previous Albany State’s new bag policy ahead of VSU matchup
Next 2019 Video Music Awards Review: Why Is This Still a Thing?