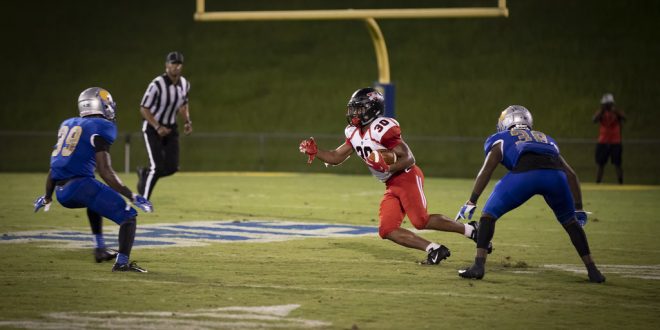 The Blazers will face Ohio Dominican in a home opener on Saturday. Kick off is slated for 6:05 p.m. ET

The Blazers delivered a complete performance in their opening win. They had more yards passing, rushing and won the turnover battle in week one over the Golden Rams.

For VSU, it was a necessary start to the Gary Goff era, continuing the Blazers winning streak to 16 in a row, and showing real positive signs of things to come. Here are the five major takeaways from week one.

Rogan Wells is the former runner-up for the Harlon Hill Trophy as the Division II most valuable player. One of the favorites to win the award in 2019, he picked apart the Albany State defense, throwing for 215 yards and rushing for 50 yards and picking up two total touchdowns.

Wells is the focal point of the offense, and his efficiency passing the ball is something the Blazers rely on. His best work came in between the Albany State zone, using short and intermediate passing to find holes in the defense.

The success of the Blazers depends on Wells, and seeing him looking sharp under a new coach is a positive sign for the season to come.

Another aspect of the offense is their ability to click at the beginning of the game. With week one games typically seeing a lot of mental mistakes and confusion, especially in a new scheme, this was not the case for VSU. They were rolling for their first four possessions, including their opening drive going for 97 yards, capped off by a Seth McGill 10 yard touchdown run.

The offense shows real potential again in 2019, after being one of the best offensive teams in the country last season. Wells and head coach Gary Goff both said that they enjoyed playing uptempo, and it really made a difference for the Blazers. Wells in particular was impressed with how sharp the offense was early. The early start was too much for the Golden Rams, as they couldn’t recover going down 14-0 early.

Defensive back Cory Roberts said that the defense was great at reading their keys to the Albany State triple option scheme. One of the difficulties in defending an option offense is that

the system is built on deception, particularly when passing the ball. Option offenses don’t throw often, so the goal is to catch the defense by surprise.

For the Blazers, discipline was key in forcing turnovers, and they have to keep that focus throughout the game, as they have the talent to dominate every week.

Coming into the season, coach Goff stressed that the team needed to stay disciplined and eliminate mental mistakes to be successful. The first half they were very effective, only committing two penalties. However, the second half saw more struggles, as there were five penalties by the Blazers.

In particular, the first drive of the third quarter saw two false start penalties that caused the Blazers to move back and miss a field goal. Those mental errors won’t go over very well against better teams, and it’s something the Blazers will have to adjust going forward.

Going off of the penalties, it’s abundantly clear that the Blazers have the talent to defeat anyone in the country. They were efficient, fast and commanding in their opening win, and the discipline and complacency is the only thing in their path. The team only scored 10 points in the second half, including zero in the third quarter.

That sort of inconsistency won’t work against tougher opponents, and the Blazers will need to remember to keep the foot on the gas throughout the game.

Overall, the Blazers were incredible in game one. But a coach like Gary Goff will see the areas to improve, and have this team primed for another title run.

Previous Blazers, Goff start season 1-0 with victory at Albany State
Next Editorial: VSU’s parking model is even worse than before