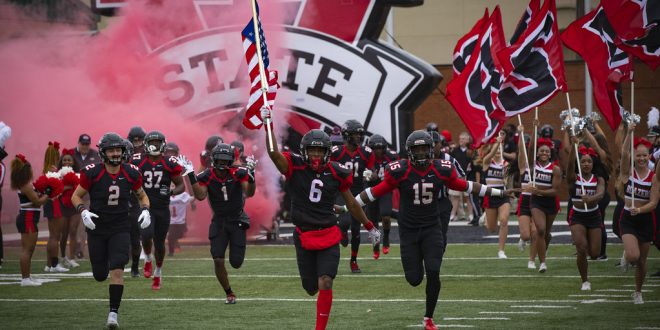 The Blazers will continue their home stand next Saturday as they enter the GSC slate, facing West Alabama at 7 p.m. ET

Actually, witness. The No. 1 VSU Blazers (2-0) have steamrolled through their competition for a school-record 17 consecutive wins, last losing to West Alabama on Nov. 4, 2017.

The Ohio Dominican Panthers (1-1) were the victims on Saturday night, losing 48-14 to the reigning defending champion Blazers in their home opener. The company which powers Bazemore-Hyder Stadium must’ve took the day off.

The Blazers had all the electricity.

“Everybody talks about how electric and dangerous we can be,” head coach Gary Goff said. “As you go through a week of practice…you get into a routine. The play with [Ivory Durham] and [Lio’undre Gallimore], what two tremendous athletes. What a great way to start a game.”

After closing out the Panthers on their opening drive, the Blazers wasted no time putting digits on the scoreboard.

It took one play.

Redshirt-junior quarterback Rogan Wells snapped out of a shotgun-formation. Back-up quarterback Durham, disguised as a wide receiver, takes the reverse hand off from Wells and locates Gallimore downfield for a 58-yard touchdown.

“My coach talked about it the whole week,” Gallimore said, totaling a game-high 133 yards on five receptions on the night. “He said ‘We are going big the first play.’ I already know once I get the ball in my hands one time it’s just a groove from there.”

As Wells initiated the play and watched the long ball soar through the air, he couldn’t help but notice the sea of red in the stands.

“It was a lot of people here,” Wells said. “We wanted to be more exciting and the fans bring more excitement to the game. Being back home, we don’t have to travel anywhere, and we’ve got a lot of energy.”

Wells found Benjamin for a three-yard strike in the end-zone to put the Blazers up 14-0 to close out the first quarter. The Blazers amassed 587 yards through the air.

Afterwards, the running game had much of the energy for the night, with five total touchdowns on the ground amassing 260 yards. It was the strong suit in the match-up and the Panther couldn’t contain them.

Wells, 15-22 for 220 passing yards, called his own number with a 10-yard escape in the middle of the third quarter. Quahlin Patterson and Durham both punched one in while in the red zone to close out the fourth.

“We threw the ball a lot and we got the ball down to the goal line,” Wells said. “Once we got to the goal line, we wanted to see what our [offensive] line can do and just powered through. That’s what we focused on [Saturday].”

One was recovered by the Panthers. Luck saved the second.

“I am not happy about that,” Goff said. “I told the team afterwards that,’ You don’t know how good we can be.’ The nice thing is we will try and work and improve, then the sky is the limit for them. I want to see it on film and see if there are some things [the coaching staff] can teach better.”

Goff has two games under his belt, so far. In those two games, he noticed one thing.

“We are a dangerous football team,” he said. “We have a lot of weapons. I want to see improvement every day. There’s things the coaching staff has to tighten up and some things the players have to tighten up.”

The Blazers will continue their home stand next Saturday as they enter the GSC slate, facing West Alabama at 7 p.m. ET

Previous Remember the Legend: Tupac Shakur
Next Three takeaways from Blazers versus Panthers