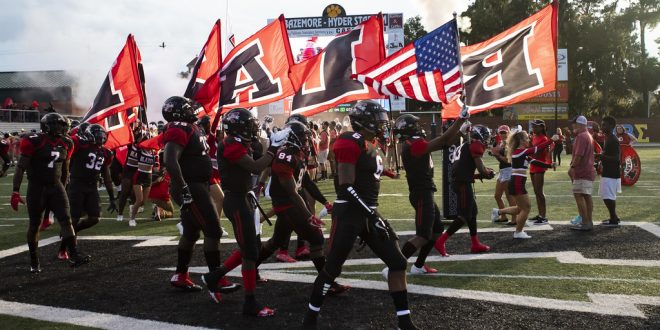 The Blazers are 7-0 all time versus Shorter. VSU defeated Shorter 52-0 in the last matchup on Sept. 9, 2018 at Bazemore-Hyder Stadium.

That’s one word to describe the football history of the Blazers versus Shorter.

Since their first matchup in October of 2012, Shorter has found it nearly impossible to defeat the Blazers.

In seven games all-time, the Blazers are undefeated against the Hawks. In their most recent matchup which took place at Bazemore-Hyder Stadium on Sept. 9, 2018, the Blazers defeated the Hawks, 52-0.

Rushing was in abundance as Blazers running back Jamar Thompkins amassed 115 yards and a score on 11 carries. Seth McGill added 98 yards and a game-high two rushing touchdowns.

Quarterback Rogan Wells had a lackluster evening, passing for 192 yards and one score. He was 12-of-30 passing in the game, which was his worst of the 2019 season.

Back-up signal caller Ivory Durham filled in where Wells couldn’t, passing for 113 yards and two scores. The Blazers offense totaled 583 yards to just 223 for the Hawks.

A year prior, the Hawks lost with the same 52-0 score on their home turf. The Blazers controlled the football, running 88 plays to 49 by the Hawks.

What makes matters a bit worse is the Hawks have not scored a single point against the Blazers for three straight years.

On Oct. 22, 2015, the Hawks came within eight minutes of rewriting history and downing the Blazers. After an 81-yard run late in the fourth quarter by former Hawks running back B.J McCoy, the Hawks trailed 27-22.

Then the Blazers happened. A field goal and a 91-yard run from former Blazers running back Cedric O’Neal sealed the deal, winning 37-22. It was the shortest margin of victory in the contest.

This was the first time the Hawks scored in double-figures against the Blazers.

This year is anticipated to be no different with the Hawks opening the season with three consecutive losses, most recently to Fort Valley State, 30-23. Shorter ranks last in the Gulf South Conference in offense and defense with averages of 15.7 points per game and 40 points allowed per game, respectively.

The two will face off for the eighth time in Rome, Georgia on Sept. 28 at 6 p.m.