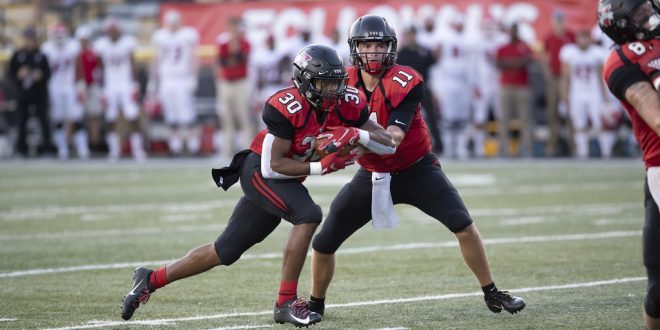 The Blazers hold a 3-0 record, currently riding a program record 18-game win streak. The Blazers will face Shorter for the eighth time in Rome, Georgia on Sept. 28 at 6 p.m.

If you are not first, you’re last.

For quite some time, the Blazers haven’t felt what it was like to be at the bottom.

The Blazers entered the 2019 season on a 15-game win streak. Now with three victories in, it doesn’t seem like the excitement and winning ways to slow down anytime soon, as they sit atop the Division II power rankings.

The Blazers defeated Albany State on the road in the season opener, 38-3. Prior to the opener, the Golden Rams received some votes in the NCAA preseason poll, as some hoped they would improve after a 7-4 season in 2018.

Then came the unknown: Ohio Dominican.

Much like the ASU, the Panthers received votes coming into the season. In the national showcase in DII, the Blazers made it a non-existent contest, defeating the Panthers 48-21 at Bazemore-Hyder Stadium.

Ohio Dominican is 2-0 versus formidable teams outside of their only loss to the Blazers.

Last weekend, then-No. 20 West Alabama came to town in a top-25 matchup that warranted all eyeballs. The Blazers turned that hype into business, taking down the Tigers, 44-27.

The Blazers went into halftime with a 12-point lead over the Tigers, never trailing less than double-digits all the way to the last whistle.

At 3-0, the Blazers and West Georgia are the only undefeated squads in the Gulf South Conference this season. The two will meet in the regular season finale in Carrollton, Georgia on Nov. 16 at 7 p.m.

In the meantime, it should be noted that saying the Blazers are “winning” is an understatement. Three games are a small sample size, but they have been dominant over those games, defeating opponents with an average 26.3-point margin a game.

Gary Goff is in his first year at head coach for the Blazers and it has been an impressive start to the season. There was a growing sense that the Blazers would take a huge drop off with the departure of Kerwin Bell.

The Blazers averaged 52 points a game last year, never actually in a close game until the national title game against Ferris State where they won 49-47.

A perfect balance for a team looking to repeat. For what it’s worth, being ranked No. 1 is exactly where the Blazers should be.