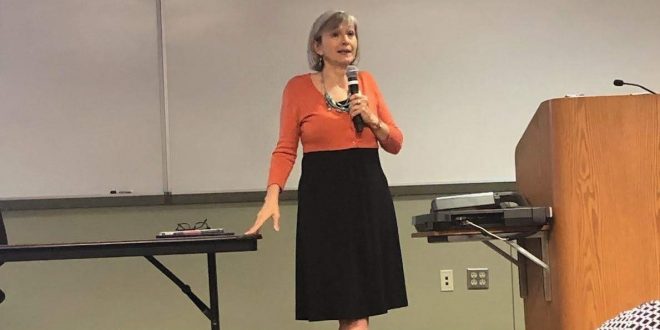 Hispanic Heritage month is here, and the Spanish department is hosting different events all month long to celebrate Hispanic culture and its people.

Grazyna Walczak is director of the Department of Modern and Classical Languages and discussed the importance of the celebration.

“It (Hispanic Heritage Month) has a good impact on the Hispanic community because it shows their contribution to the culture of this country. VSU is a very diverse population, we have a lot of Hispanic students and some with Hispanic heritage and they also feel more valued when they see that their culture is valued.”

On Sept. 24, author and illustrator Lila Quintero Weaver came to visit VSU to talk about her graphic memoir “Darkroom”.

The “Darkroom” is about Weaver’s experience immigrating from Argentina in 1961 to Alabama during what she described as the “most intensive and dramatic parts of the civil rights movement.”

She arrived in Alabama at the age of five and her family experienced a huge culture shock. Her parents were very in tune with their Argentinian roots and they wanted to preserve their Argentine culture.

The community which she entered, however, had different ideas. “I went from being a kid who spoke no English at all to beginning to abandon Spanish,” she said.

Weaver described her neighborhood as predominantly black, but the most segregated area in Alabama. About 65 percent of the community was black and the rest were white. There also happened to be a small number of Hispanics in the area at the time.

As Weaver grew up, she was confused as to why there was a separation between black and white. Why would black people have to enter through the back of the doctor’s office when the whites could enter from the front?

She recalled the time she heard about a black man being killed by a police officer not too far away from her home but explained that she had never caught his name. About 30 years later at a civil rights museum it was then that she had then learned it. His name was Jimmie Lee Jackson. It was an emotional moment for her to now have that name of the man that had been killed.

Jimmie Lee Jackson was black man who was shot by a state trooper about a block away from where she lived in 1965, and served as the catalyst for her memoir.

His death also helped spark the march across Selma. March 7, 1965 was the first attempt to march from Selma to Montgomery. That event exposed southern police brutality as never seen before.

The creation of the memoir took about 3 and a half years to process and edit. She explained that she wanted the readers of her graphic novel to understand the issues that she saw at such a young age.

As the talk concluded, Weaver explained she believed it was best to create her memoir in the perspective of her being a small child because it allowed for the graphic novel to be for everyone, no matter the age.

“My story kind of helps to show how Latinos is a broad community with many different groups, and everyone has their own unique story. So, that helps to sort of push back from all of the stereotypes that people have about Latinos.”

On Feb. 3, VSU students and faculty received an email regarding the campus becoming a ...