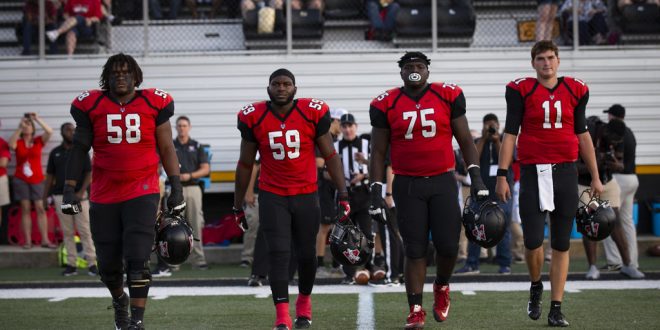 The Blazers will face West Florida at Bazemore-Hyder Stadium Saturday at 7 p.m.

Through the first four games, the Blazers are unbeaten, and don’t seem like they’ll give in any time soon. Also, riding an NCAA Division II 19-game win streak, expect that amount to increase in the coming weeks.

Here are my predictions of the last six weeks of the regular season.

It may not have seemed like it then, but the Choctaws matched fireworks with the Blazers last season.

VSU won 63-42 on the road, giving up the second-most points of their season (Ferris State scored 47 in national title game).

I think the Choctaws will come out swinging with two back-to-back scoring drives, not allowing the Blazers to get off anything. VSU will then pick up the pace going into the half to tie the game somewhere in the ballpark of 24-24.

VSU head coach Gary Goff, after a halftime talk in the locker room, will use some offensive brilliance to pull away in the second half.

This season, the Choctaws hold a 2-2 record coming into the matchup, dropping their most recent contest to West Florida on Sept. 28. It should be noted the Choctaws are top five in rushing yards a game at 170.5 a game.

This one should be close, so hold onto your seats.

Up to this point, the Blazers will have faced much inferior competition. Even with the scare from the Choctaws, it shouldn’t sting too much within the team.

Delta State has the tools to beat the Blazers however. No. 1 in rushing defense (74.8), the Statesman have shown they can make teams one dimensional. But it won’t be enough.

The Blazers are efficient at moving the ball downfield through the air. With the Statesman occupying the trenches and looking to stop running backs Jamar Thompkins and Seth McGill, expect wide receiver Lio’undre Gallimore, Brian Saunds and others to catch a lot of passes.

The Statesman will be able to run on the Blazers in the second half, but it will be too late. Rogan Wells will target his receivers, making Statesman defensive back Jakwon Lipscomb work.

It won’t be pretty. Fans should be exiting the Parker Field-McCool Stadium by the start of the fourth quarter, confident in the outcome.

This probably won’t get much hype leading up, but there’s something interesting about these two squads. The Blazers and Florida Tech are practically similar in some areas.

Both pass well. Both have a primary weapon.

Miles Kelly leads all receivers in yards with 372. Gallimore isn’t too far behind at 270; Saunds at 265. These targets should get ample opportunities prior to their matchup in just a couple weeks.

Panthers quarterback Mike Diliello leads all eligible players in rushing touchdowns (6). An unusual statistic for a rather pass-happy squad. The Blazers defense should be able to neutralize the dual-threat presence.

Quarterback play lacks efficiency. The receiving corps is non-existent. There’s an APB out for their run game. Their defense, however, is solid.

The Blazers won’t ask questions, nor do they care about their opponent’s lack thereof. I can see Wells splitting time halves with Ivory Durham, to get Wells some rest to close out the regular season.

This game will be a good week for the Blazers to get prepared for their last two opponents, which some believe are their biggest rivals.

The young kicker will be needed in this huge game, strictly because it will come down to the wire. This will be the first time in a long time that the Blazers will score a game-winning field goal.

You could make an argument that Austin Reed is the best signal caller in the GSC. But Wells has solidified it with his team’s success. Reed leads all quarterbacks with 10 touchdown passes.

You can’t make this up.

It will come down to the wire. I don’t expect a blowout by a longshot, even with the long history of the Blazers demolishing teams in three quarters.

This game is marked on everyone’s schedule from the moment the league releases it. The Blazers are 6-5 against the Wolves since 2010.

Last season, the Blazers hosted UWG, handing down a 47-31 victory in front of the VSU faithful. This year should be no different.

Passing looks effortless coming from the Blazers offense and it will not stop here in the regular season finale. Don’t get blinded by the 133.5 yards allowed through the air by the Wolves.

They have played lesser competition than they would like to acknowledge.

Also, the Wolves give up too many rushing yards. They rank No. 1 in rushing yards allowed with 898. Thompkins and McGill are smiling.

The Blazers will probably shut down Wells after the second quarter, depending on how much of a lead they have. Durham will bring it home to close out yet another perfect season.

Previous Editorial: The arts are underfunded and underappreciated
Next SGA narrows on financial aid issue in Monday meeting