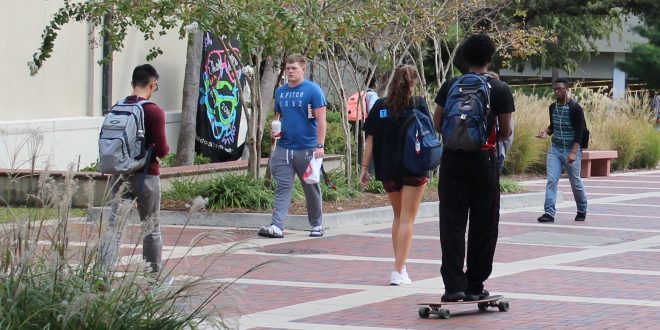 Students' choosing to attend college closer to home is among reasons for VSU's drop in freshman enrollment.

Tee Mitchell, associate vice president for enrollment management, and Barrie Fitzgerald, director of institutional research, made comments and provided more insight on why they believe these freshman enrollment numbers have decreased.

“What’s interesting is that I have talked to my counterparts at Kennesaw State and at Georgia State in Atlanta, and they have record freshman enrollment and record overall enrollment,” Mitchell said. “And here’s what that tells me; that tells me we’ve been hearing in the media now that we’re looking at a recession again and anytime people hear recession they freak out and people stay close to home.”

During college enrollment season on June 12, 2019, CNN posted a story addressing the 60% chance of a recession beginning in the end of 2020.

“When recession hit in 2008, that’s when enrollment started to go down in South Georgia and schools in Atlanta really started to pick up, and so I think that’s part of it,” Mitchell said. “It’s kind of interesting to see that the schools in Macon-South have all took a hit this year.”

“We are also battling for the same students,” Fitzgerald said. “So, Kennesaw is our competitor, and as USG, if we’re both going at the same student and one can advertise ‘Hey, you’re right here at home, you can live at home with your parents and not accrue debt from room and board going down to Valdosta.’ That’s a huge selling point for a student.”

Freshman around campus have commented on the topic of decreased freshman enrollment and explain their reasoning behind attending VSU. Hunter Dean, a freshman majoring in business management, explained that Valdosta was close to home for him and he’d be following tradition.

“The fact that my whole family is Alumni brought me to VSU,” Dean said. “I also considered Georgia Southern and University of North Florida.”

VSU’s many majors are one of the few reasons why freshman continue to enroll.

“Honestly, Valdosta State had my major and it was in-state, so that’s what attracted me to the school,” said Michael Tanks, a freshman majoring in health anatomy. “I don’t think freshman would attend Valdosta because of the location and there not being much to do here or in the area.”

Freshman enrollment is not only down in VSU, but also in other South Georgia schools. There are reasons to believe that recession might have something to do with these statistics.

Previous The Life You Save May Be Your Own: VSU hosts domestic violence awareness event
Next People Poll: Where’s the best place to purchase Halloween costumes in Valdosta?