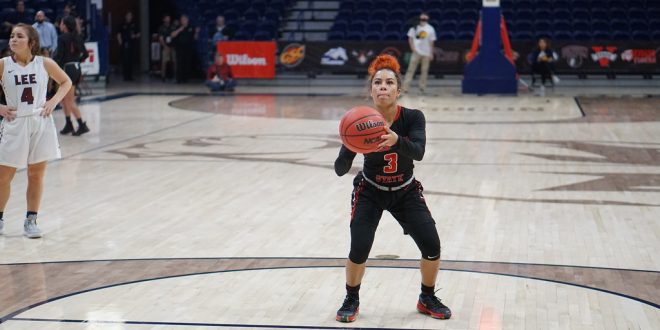 The Valdosta State Women’s basketball team have lofty expectations for the upcoming season.

Despite losing to Lee University 81-73 in the Gulf South Conference championship game last season, the Lady Blazers believe that this season is theirs for the taking.

The voters don’t think so. The Lady Blazers are projected to finish No. 5 in the GSC, in the latest conference preseason polls.

“Our players were a little upset with that,” Head coach Deandra Schirmer said.

Schirmer is entering her first-year at the helm for the Lady Blazers. The team has shown their trust in Schirmer.

“With this group I’ve been very appreciative of how they’ve come in with their work ethic and they come in every single day, and they get to work,” she said. “I’m very thankful that they’ve come and bought in to the system I put in.”

Coach Deandra Schirmer was an assistant at Eckerd College for five seasons and was elevated to Associate Head Coach in 2018.

She’s also a former student athlete. She played at Cloud County Community, earning all-conference and all region honors as a sophomore.

Kayla Bonilla, entering her third year at point guard, will serve as one of just a few veterans on the squad. Like all athletes, she has set her own personal goals.

“I was almost there last season so it’s not like it’s not reachable. I can definitely do it.”

She didn’t leave out the rest of the team.

“This season were trying to win most of our games definitely,” Bonilla said. “It’s going to be a couple of teams that’s going to be tough, but we can definitely come out on top, and we want to be the first team in the conference like top one or two.”

Bonilla will have to adjust to the offense of coach Schirmer. But, Bonilla believes the team will buy into it.

“We have a new system this year,” she said. “We’re not really running plays we’re just running sets. It’s basically new to all of us so we just have to buy in.”

VSU will have an exhibition matchup versus the University of Florida on Oct. 30 at 6 p.m. in Gainsville, Florida.

The Lady Blazers will have their season opener Nov. 8 against Fort Valley State at 5 P.M. at the VSU Complex.

The Lady Blazers have won the last two season openers against FVSU.

Previous The 4-year vs. 2-year college debate: Which is better?
Next Questions & Answers: Deandra Schirmer