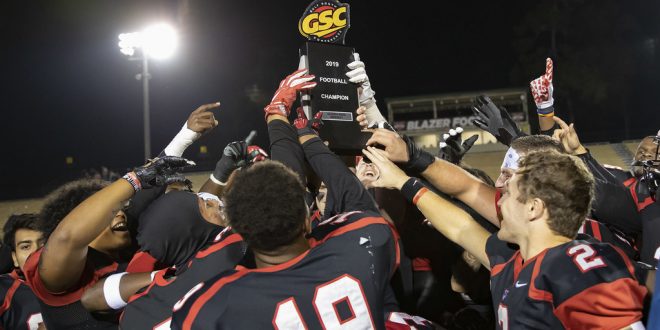 In the nippy November air, the VSU Blazers held onto the ball for the last three-and-a-half minutes to secure the 26-21 victory and the Gulf South Conference championship for back-to-back seasons against the West Florida Argonauts.

Both teams entered the game undefeated in conference play, so whoever left Bazemore-Hyder Stadium with a victory would also hoist the illustrious trophy

“Our game plan was really good,” Wells said. “Hitting Jamar [Thompkins] and our running backs, getting into the backfield was tremendous.” Wells threw 26 passes for 36 attempts and 350 yards on the night.”

On the other end of the ball, the Blazers defense held the Argonauts scoreless and only allowing 62 yards. Defensive Lineman Ja’Devian Williams led the team in sacks, both earned in the first half.

“It was all a team effort,” Williams said. “My team opened it up for me, I got back there as fast as I can and made the play.”

The momentum was put on pause as the Blazers went into clock management mode, scoring on an 11 play and over six-and-a-half-minute drive between the third and fourth quartesr to put the game just out of reach.

A factor was how the Argonauts were going to create and score off turnovers, winning their past 41 of 45 games after causing at least one turnover.

Although Blazers lost a fumble in the second half which led to Argonaut points, it was the only turnover of the game.

The Blazers had a hot game on the ground in the first half, tallying 181 yards behind sophomore running back Jamar Thompkins, running for 65 yards and catching another 53 yards from the air.

The Blazers look to continue their 24-game win streak entering the rivalry game on the road against in-state rival West Georgia, while the Argonauts will go back home to play West Alabama.