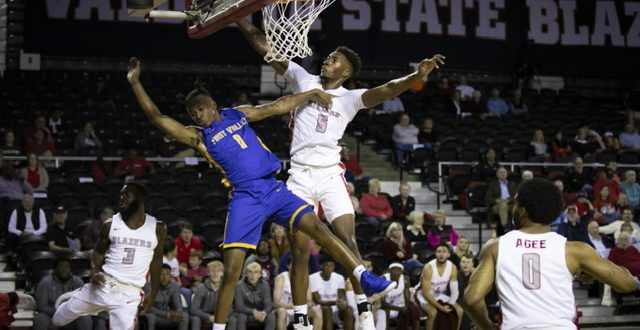 Bryce Smith was a force inside for the Blazers, and he was a big reason VSU was able to beat Auburn Montgomery 95-83.

Taking it to the hole. The Blazers used their size to attack the opposition.

VSU has been on a roll as of late as this win topping Auburn Montgomery 95-83 marks their eighth straight victory.

The score looks farther than the game actually was. Late in the second half, the big men of VSU stopped settling for three-point attempts and aggressively went to the paint.

The Blazers were only up three at the half to a score of 44-41 as the team struggled shooting well from outside the arc.

“We played good but not great, as they didn’t allow us to play up to our best because they are a good basketball team, Helfer said. “I think they’re the most deceptive team with that record in the country, I feel like they’re way better than their record for us at halftime it was about respecting them and what they bring to the table.”

Bryce Smith struggled shooting throughout the game, but finished with 17 points as he hit big shots down the stretch and was a force on the defensive end when they needed him to close out the game. Smith also had a team leading three blocks in the victory.

Burke Putnam finished with a team leading 26 points and eight assists, while Darrell Jones added 19 of his own. Overall, the Blazers had four players finish with double figures in scoring.

But even in the late stages in the second half, the game was still in balance as Auburn Montgomery pressed VSU in the final two minutes.

Coach Helfer identified the defense and the team executed the game plan on offense which helped fend of the visitors and lead to a W in left column.

“They started to try to press us but what we were able to do was our press offense stretches the press backwards, we knew it was coming because we saw it on tape.” Helfer said.

Home court advantage is something VSU thrives off when they play at the P.E. Complex and this game was no different.

“We feed off the crowd all the time, I don’t think there is a better home environment when this place is packed with our students it’s incredible and an exciting place to play.” Helfer said

The home crowd won’t be in attendance as the team hits the road to travel and play University of Montevallo on Feb. 1, as they look for their ninth straight victory.