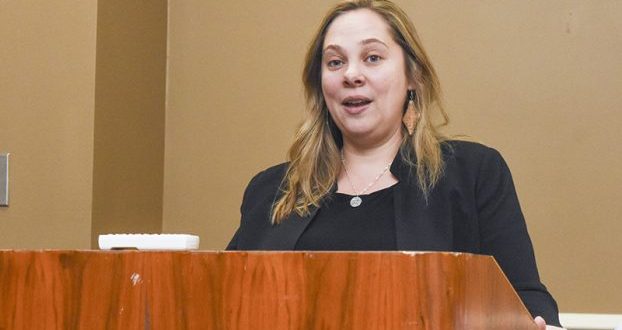 Sarah Riggs Amico (Democratic Party) is running for election to the U.S. Senate to represent Georgia.

Amico, who was running mate to Stacey Abrams in 2018, is running against Republican incumbent David Purdue. She made it clear that her main message to students is to get engaged.

“If you take away nothing else from this event tonight, whether you are Republican, Democrat or Independent, it doesn’t matter, get engaged in the political process,” she said. “Because political participation is how we form a more perfect union.”

Amico believes that the country has a huge healthcare problem, citing stories such as a north Georgia woman receiving a $30,000 hospital bill for one emergency visit. She advocates for Medicaid expansion, which would allegedly cover almost half a million more Georgians if implemented. She is also pro-public option, which is a secondary, government-run healthcare alternative to private health insurance.

On the topic of gun violence, Amico defends the second amendment right to bear arms and supports law-abiding citizens’ maintaining their right to protect themselves. However, she is in favor of universal background checks and red flag laws, which “flag” people that are deemed mentally unstable or abusive.

While in theory red flag laws would be characterized as common-sense gun reform, some worry that red flag laws could be irresponsibly used out of spite to strip law-abiding citizens of their second amendment right.

Throughout the rally, Amico also focused a considerable amount of attention on justice and human rights in corresponding areas such as climate change and voting rights, saying that they disproportionately affect people of color.

“We have an inequity problem,” she said.

While speaking in a generally unifying manner during the rally, Amico did not hold back against her opponent, David Purdue.

“My opponent David Purdue is a retired fortune 500 CEO and career politician who has done nothing but give tax cuts to his billionaire donors. He has also never hosted a town hall because he serves his donors, not the people of Georgia,” she said.

Amico tied it altogether at the end by saying that she is not a politician, but rather a servant of the people, and will fight for the issues that matter the most to everyday Americans, instead of what matters the most to board members of special interest groups.

Emily Johnson, vice president of the VSU Young Democrats, explained why Amico was chosen to speak at their first event of the semester.

“We’ve gotten to know her through several democratic state dinners and events, and we love her energy,” she said. “She is not divisive, but rather brings people together, and that’s what democrats and Americans really need these days.”

In terms of plans for the rest of the semester, the Young Democrats have more speakers coming to campus, as well as The Great Debate making its return on March 23.

The Great Debate is the grand political event of the school year in which the College Republicans and the Young Democrats battle it out over the most pressing political issues the country faces.

Previous VSU professor says coronavirus still an enigma
Next How vegan-friendly is VSU?