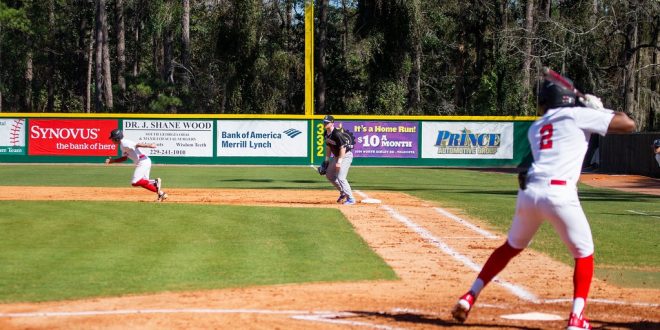 Nick Lewis, at the plate, was a key player to the Blazers sweep over Rollins.

Valdosta State Blazers recorded their second consecutive sweep this season against Rollins College, capping the weekend with a 7-3 win.

The offense has been a huge factor, scoring four runs or more in each of the last seven games.

Nick Lewis and David Maberry were responsible for three of the Blazers’ seven runs of the afternoon, both coming off of home runs.

“We’ve been big sparks for the team all year and the guys believe in us, so we had to believe in ourselves,” Lewis said.

The most runs came in the fourth inning, where Maberry hit a two-run home run and Mike Christopuolos scored on a wild pitch from the Tars.

The Blazers scored first off of a Maberry single that drove in Alec Aleywine. Two more runs came in the seventh when Nick Lewis and Jordan Holt scored on Aleywine’s single.

On the defensive side, Tristan Cone recorded the win pitching six innings and striking out six batters. He improves to 4-0 on the year so far after allowing eight hits.

Cone had to pitch himself out of a couple jams in the fourth and fifth inning, where the Tars had two runners on base before each side was retired.

“It’s something I struggled with all year, but I just went back to the simple things,” Cone said. “Normally my strength is my change-up, so I just had to hit my spot.”

The Blazers’ bats were hot the entire weekend, winning all of the games on an important offensive play.

On Friday, the Blazers scored six runs before the Tars could score, then came from behind in the ninth inning on Saturday off a sacrifice fly.

“We were very patient at the plate,” Head Coach Greg Guilliams said. “We’re getting a lot of guys on base and when you do that, good things happen.”

Across the whole weekend, the Blazers allowed an average of four runs a game, a big testament to the defensive effort. The only major blemish was two errors recorded in the first inning on Saturday.

“Outside of [the two errors], I thought we played good defense,” Coach Guilliams said. “(Seth Caballes) was really good behind the plate.”
Caballes, the junior starting catcher, had to be pulled out of the game in the fifth inning on Sunday from a hit on a catcher’s interference. Coach Guilliams said he was pulled to ice his hand to prevent it from getting worse.

The Blazers will play again at Billy Grant Field on Wednesday as they face Thomas University before a weekend conference series with Lee.

Previous Women, weed and wellness: Celebrations of March
Next Versatility key as Blazers advance to semifinals