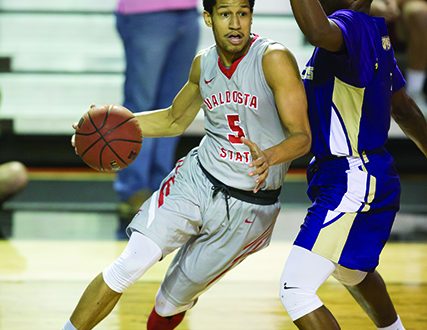 Many students here at VSU probably couldn’t tell you where Kazakhstan is on the map, but one former Blazer, in particular, is in the beginning of his professional career there.

Jeremiah Hill had an excellent career with the Valdosta State University Men’s Basketball team, winning several awards. Now, he finds himself thousands of miles away from home, signed to a professional team in Kazakhstan and hitting the road to face teams from places like Russia and Poland.

Hailing from Richmond Hill, a town of about 14,000 people and located 30 minutes from Savannah, Hill began his journey from little league sports to professional basketball overseas.

Hill was a multi-sport athlete up until high school. He played baseball and basketball at Richmond Hill High School until he decided to let go of baseball and focus on basketball, the sport he felt he was better at. According to Hill, however, his mom thought he was better at baseball. It is safe to say that he made the right decision even though his height is listed at 6 feet 2 inches, which is on the shorter side for a professional basketball player.

Once it was time to choose a college to commit to, Hill was pointed to VSU by a family friend, so Hill decided to go and check it out for himself.

“I went and visited and had a great time,” he said. “That’s all there is to it…I don’t have any fancy story or anything. It was just that simple.”

He was a standout at VSU, playing in 77 games and starting in 55 of them. Hill earned Gulf South Conference Player of the Year honors in 2017 as well as National Association of Basketball Coaches All-America honors. According to Hill, basketball is truly a team sport despite awards honoring him as an individual player.

He is quick to clarify, however, that he felt he was “better than most people,” regarding the competition he faced throughout the 2016-17 season.

“I didn’t set expectations for myself because when you do that, you’ll either blast threw them or fall short,” Hill said. “You’ll be devastated or become complacent.”

In 2019, Hill competed with the Orlando Magic and played in all four games in an NBA Summer League—which he describes as a “big tryout”—in Las Vegas, Nevada. He was named Player of the Game by the Magic when the team faced the Brooklyn Nets and Hill led all scorers with 21 points.

During the same summer in 2019, Hill signed with PBC Astana (Kazakhstan) of the VTB United League. When asked about this contract and how it came about, being that it is with a team so far away from where Hill calls home, Hill had just as much of an idea as anyone else did.

“I’m not exactly sure how that happened, honestly,” he said. “I have an agent, so he kind of just set that up for me and presented the offer to me.”

Now, Hill is in his second year with PBC Astana and is coming into his own as a professional basketball player in Kazakhstan.

As for making the move to Kazakhstan, it is never easy adjusting to a new place, especially when that place is nearly 7,000 miles away from home and overseas, but Hill is settling in quite nicely.

Hill is solely focused on basketball for the time being. A lot of athletes go into their professional careers with plans to play for a few years and then use the money they make to invest in business ventures outside of basketball. This is not the case for Hill.

Hill is enjoying his time in Kazakhstan, but is hopeful he will get the opportunity to move around and experience all kinds of places throughout his basketball career.

“You always want to go and see new places, man; you can’t just stay in one place forever,” Hill said.

As our conversation came to an end, Hill had some advice for current VSU student-athletes.

“Believe in yourself,” he said. “Nobody knows the plans that you have or what the future may hold—anything can happen. Enjoy the time you have doing what you love. If you don’t enjoy it, don’t do it.”

Previous Photos: VSU’s campus transforms during COVID-19
Next Free COVID-19 testing Locations Around Valdosta You Should Know About