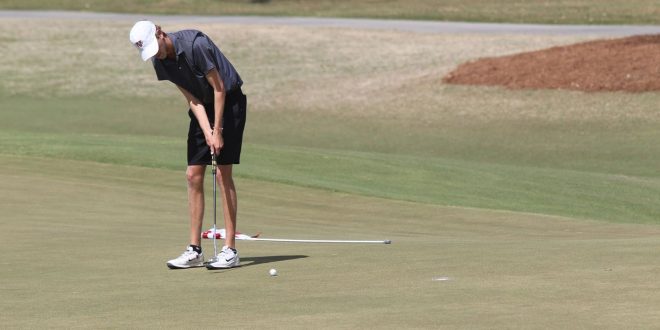 The Valdosta State men’s golf team has wrapped up their fall slate, one that was shortened due to the ongoing coronavirus pandemic. As they look to continue to improve, they prepare for a seven-tournament slate in the spring.

According to Head Coach Richard Purvis, the VSU golf team normally participates in four tournaments in the fall. However, due to conferences delaying the start time and some teams choosing not to play because of the pandemic, there were very few tournament options available.

According to Purvis, VSU has played teams that reside in the southeastern United States. This includes teams from the Gulf South Conference, Peachbelt Conference, Conference Carolinas and even a few teams from Division III.

Even with VSU only playing in two tournaments, Purvis emphasizes that things have not changed as to how the team has approached the season.

“It has not seemed like a shortened season, with the exception of only playing two events,” Purvis said. “Our goals are the same as they have always been and that is continuing to see improvement and growth in our games.”

The men’s golf team, like every other sports team across the country, has had to adjust to a new normal with the coronavirus still raging on in the United States.

“The team has handled the situation nicely,” Purvis said. “We are following guidelines to minimize our chance of contracting coronavirus, and not once has anyone complained about all the precautions, as they just want to compete.”

There has also been measures that have been put in place at tournaments and at practice to further reduce the spread of the virus.

“To minimize risk, flag sticks are left in on the golf course and rakes have been removed from the bunkers,” Purvis said. “When we travel, masks are worn at all times in the van, and all of our meals are eaten in our hotel rooms, with us only getting carryout meals.”

As for the team’s performance in their most recent event, the UNG Fall Invitational, Purvis and the team were hoping for a little better.

“The UNG event was a fair performance,” Purvis said “We were hoping to be in contention for the title, but we did not convert enough of our birdie opportunities and that saw us finish in the middle of the pack.”

While these two events will have an impact on the team’s postseason fate, it is the seven events in the spring that will be the deciding factor.

“These two events primarily keep us mentally tournament sharp and also exposed some areas of the game we need to improve,” Purvis said.