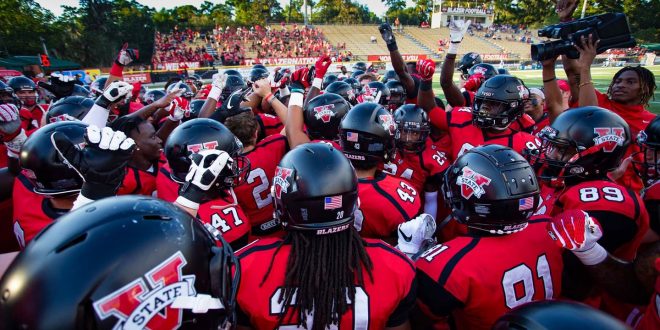 Lio’undre Gallimore is a wide receiver at VSU who has overcome a lot, but football has been there for him through life’s difficulties.

The first time Gallimore stepped on a football field was in Miami, Florida, the coach put him at quarterback, but he hated it. Gallimore wanted to be a running back and wanted the ball in his hands every play.

From that first day all the way to winning the national championship in 2018, football has always been a major part of Gallimore’s life.

“Growing up in Miami was different,” Gallimore said. “There was a lot of violence and the only way to survive was football.”

Gallimore played wide receiver at Mater Academy Charter. In a regional semifinal match up against the undefeated McArthur High School Mustangs, he scored with five seconds left to secure the win for Mater, 14-13.

In 2017, he got to VSU, as it was the last offer on his table. That year he played in five games. His sophomore season, he started all 14 games and earning first team all-conference honors. For that season, he had 36 catches for 900 yards and nine touchdowns.

In his sophomore and junior seasons, he made a big impact for VSU when they beat Ferris State in the Division II national championship, 49-47.

Gallimore had a career-defining performance in his biggest game, finishing with a total four catches for 111 yards and two touchdowns.

In 2019, he started in all 11 games and had 46 catches for 740 yards and six touchdowns. In VSU’s playoff loss to West Florida, he had season highs in catches, yards and touchdowns as he had a total of seven catches for 162 yards and two touchdowns.

For Gallimore, this past season was going to be his last ride and he wanted to prove that he was the best.

“Sometimes I feel underrated, I get over-looked,” he said. “I’m just here to prove I’m the best. I talk big game, and I’ll play a big game.”

His teammate and roommate of four years, cornerback Taurus Dotson, said he sees the true Gallimore when the two are behind the scenes.

“He’s very competitive and fun,” he said. “We have lots of memories. I feel like he’s himself around everyone and there’s not a part of himself that he doesn’t show.”

Gallimore hasn’t allowed COVID-19 to disappoint him, and he says he is confident that he will get back the chance to show how good he is in the near future.

Written by Seth Sheley, special to The Spectator. Photo courtesy of VStateBlazers.com.