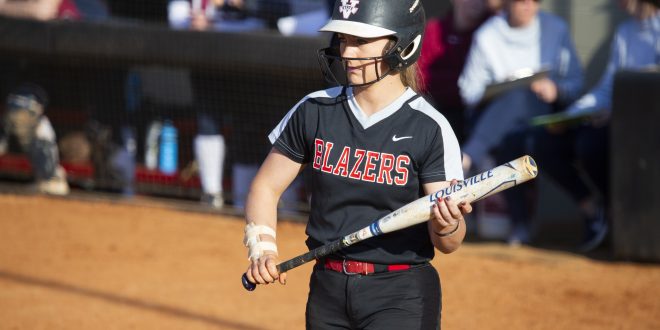 Lady Blazers softball will face a lot of pressure during the 2021 season while playing in the middle of a pandemic.

The Lady Blazers started out the year ranked twelfth in the nation. They were also picked to finish second in the Gulf South Conference.

These high expectations come after a 2020 campaign that was cut short due to the coronavirus pandemic. The Lady Blazers finished ranked fifteenth in the country, posting an 18-5 overall record along with a 7-2 record in conference play.

Despite the high expectations, however, the team knows that they must tune out the outside noise.

“There is not really any pressure on us this season,” head coach Thomas Macera said. “We are here to compete for national championships and expect to win a lot of games.”

There are areas the players would like to improve in, but Macera has one simple goal in mind.

“Every team is built different,” he said. “We have to keep working hard in practice so that we can accomplish our season goals.  We had a pretty good season last year and are hoping to build off of that this year.”

While some coaches would be glad to have elite players, Macera would be the first to tell you that it takes a team to win.

“I am not going to single out one player,” Macera said. “We have a great team this season, and all of the players have to be able to contribute when the time comes.”

One of those players, Samantha Richards, is a sophomore pitcher and early education major.  While she had a good season last year, including pitching a perfect game against Flagler, she still has things she wants to improve on.

“I want to be able to hit corners and spots more consistently,” she said. “I had a good season last year, but I need to continue to improve so that I can continue to help elevate this team.”

The Lady Blazers will play a 42-game schedule.  This schedule includes 30 conference games and a 4-game invitational tournament that kicked off the season this past weekend.  The softball team went 2-1 in the invitational, with their fourth game being canceled due to inclement weather.

The Lady Blazers will be back in action on Feb. 14 at 2 p.m. and 4 p.m. against Miles College in Fairfield, Ala.