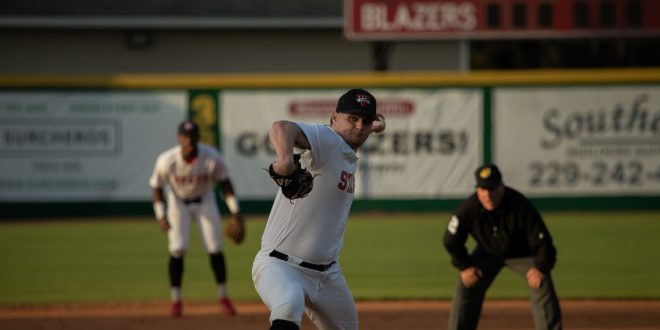 The VSU baseball team brought out the brooms on Sunday, Feb. 21, 2021 as they swept Auburn Montgomery in a doubleheader.

The No. 19 ranked Blazers lost to AUM 6-12 Saturday, but came ready to play Sunday. The team staged a huge rally down eight runs in the bottom of the seventh inning to win the game 9-10 in the eleventh. That momentum seemed to carry right into the next game where VSU pitcher Zach Blankenship shut Auburn Montgomery out 9-0.

The day started ominously when VSU’s senior pitcher Tristan Cone hit the second batter he faced and was sent home on the following at-bat for a two-run AUM homer.

The Warhawks tacked on two more runs in the next inning after a two-RBI double.

VSU couldn’t get anything going during the next three outings, recording three-and-outs in the second and third innings and a Ben Rowdon walk in the fourth.

AUM blew the game open with four more runs at the top of the fifth. Cone hit another batter and then the Blazer infield fumbled a routine fielders-choice scenario that resulted in a run scoring, runners on first and second, and a pair of VSU errors getting doled out.

The next two AUM batters would record three RBI’s to end the frame with more runs earned than hits thanks to Blazer miscues.

Junior relief pitcher Luke Ard would open the next inning against the top of AUM’s order and quickly humbled the Warhawk batter—three up, three down.

Ard came on to relieve Cone after five innings of action. Cone struck out nine batters, but hit three more, and allowed eight runs while on the mound.

The offense failed to carry Ard’s momentum to the batter’s box and the defense was quickly back on the field for VSU. Luckily, sophomore pitcher Jake Janata picked up right where Ard left off and never let the ball get out of the infield.

The momentum would stick this time for the Blazers. Outfielder, and graduate student, Jordan Holt battled through a full count for a leadoff single, the first of four straight hits to start the inning. VSU scored three quick runs before AUM recorded an out.

The Blazers would drive in two more runs before the end of the inning.

Senior pitcher Cory Wright pitched a shutout in relief through the final two innings. Coming into the bottom of the ninth, down 8-5, the Blazers needed one more rally.

Thanks to a pair of walks and a double,the Blazers found themselves with the bases loaded and no outs. Rowdon flied out and senior infielder Jowenrick Daantji drove in one off a grounder that advanced the runners to second and third.

Junior third baseman Ryan Delnegro faced a full count before he ripped the ball into left field. Both runners scored and the game was tied. Delnegro, the winning run, stood at first base. However, a quick fly out on the next at-bat marked the end of regulation.

Due to the International Tie Breaker rule placing a base runner on second at the start of the inning, AUM only needed one hit to regain the lead.

VSU reliever Zach Henderson would come on for Wright with runners already on and one out. Henderson shut the frame down with a pair of strikeouts.

Holt, the baserunner for the Blazers, stole third, and a sac fly sent him home to tie the game. A couple at-bats later VSU had the bases loaded with two outs, and a chance to end the game. Rowdon flied out.

Henderson struck out two batters in the following Warhawk’s at-bat and got out of the inning unscathed.

A successful leadoff bunt put runners on the corners with no outs. AUM intentionally walked Delnegro. Chase Corker found himself in a dream scenario with the bases loaded and no outs in extra innings.

Corker did what anyone would do and stood like a statue as four straight balls whizzed by into the catcher’s mitt. A walk-off walk secured the first and last lead of the game for the Blazers.

In game 2, AUM’s leadoff batter got to first on an error. Blankenship dug the hole deeper for the Blazers when he balked and advanced the runner.

But Blankenship would get out of the inning just fine, thanks in part to a great defensive play by Delnegro at third for one of his team-leading five assists on the evening.

A couple runs for the Blazers in the next frame made it apparent that the momentum had carried over from the last game. Rowdon started things off with a leadoff bomb to left center. David Maberry hit a double later in the inning to send another Blazer across home plate before the end of the inning.

Blankenship allowed no hits in the second inning.

Multiple mistakes cost the Warhawks two more runs in the bottom of the second. The leadoff batter was hit by a pitch, and another reached base from a walk. Rowdon smacked a hit to right field, where it was fumbled, allowing a run and put runners on the corners.

A passed ball on the next at-bat allowed another run.

Blankenship again allowed no one on base and struck out two more.

The offense slowed down for the Blazers in the third.

VSU benefitted from more mistakes in the bottom of the fourth. Delnegro found himself standing on second after being walked and then advanced on a wild pitch. Holt hit an RBI-single a bit later, to add to the lead.

On the following defensive drive, Holt laid out in center field to keep Blankenship’s no-hitter bid alive in the sixth.

Blankenship allowed a walk in the eighth, his only walk of the night.

The walk in the eighth inning marked the end of 22 consecutive outs for the defense.

The Blazers tacked on one more run in the ninth to make the score 9-0.

However, one of AUM’s final batters of the night gave AUM its first hit of the game.

Blankenship was two outs away from becoming just the seventh VSU pitcher to record a no-hitter.

Blankenship was named GSC pitcher of the week for his dominant performance against AUM’s order. He struck out ten and only allowed the one walk and hit. AUM managed a total of just three baserunners and a .034 batting throughout the game.