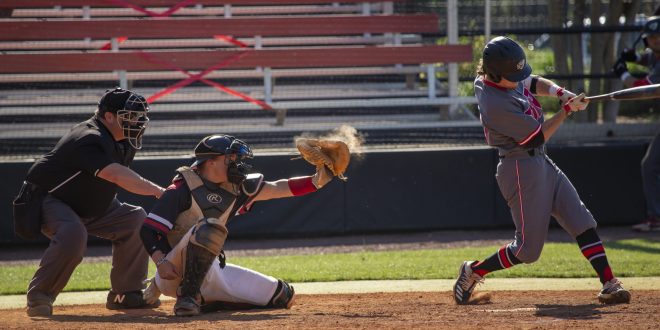 The VSU baseball team swept rival West Georgia in the last homestand of the season and looks to extend their winning streak against Christian Brothers this weekend.

VSU has pulled off six straight victories in response to dropping the previous six straight games. In what VSU baseball coach Greg Guilliams called a “season of streaks,” VSU now stands 18-11 in the Gulf South Conference and 20-12 overall.

VSU was able to end senior day festivities with a win thanks to a freshman: catcher Jacob Harper. With the game tied in the bottom of the ninth and VSU down to their last out, Harper hit a walk-off single into right field that drove home Collin Teegarden and secured a win for game one.

Coach Guilliams said Harper has been great for them in multiple facets of the game.

“Hopefully, he [Harper] can keep doing what he’s doing,” he said. “He’s caught very well and thrown very well for us, and he’s starting to provide some offense. He’s starting to get into a groove, and I think it shows.”

VSU controlled most of game two, an 11-3 victory with senior pitcher Tristan Cone earning one last win at home for his five-year career at VSU.

In the final inning. VSU rode a four-run fourth inning to the victory—a 4-3 nail-biter where Valdosta’s relief shined. West Georgia managed just one hit in just a little under four innings of action from VSU’s bullpen.

CBU went 1-2 in their weekend series at Union, which brings their conference record to 3-26 (5-27 overall).

CBU ranks last in the Gulf South Conference in batting average (.223), slugging percentage (.300), on-base percentage (.309), runs, walks and they strike out the most.

They’re also last in the league in home runs, with only eight, and nobody on the team has hit more than one.

Unlike the offense, there are a couple of starting pitchers with some experience for CBU. Jonathan Baldelli and Blake Dallas, juniors at CBU, lead the team in innings pitched and games started.

CBU ranks in the middle of the GSC with 235 strikeouts but has walked the fourth most batters.

The team is ranked 10th in the GSC with a 6.2 ERA, bolstered heavily by the numbers of their two main starters.

CBU’s number three starting pitcher, Travis Cole, also plays infield and is ninth on in ABs (65). Cole’s .338 SLG is third on the team, but the .200 BA limits the sophomore’s ability to impact the offense.

On the mound, his 8.39 ERA has not done much to help an offense that generally needs the score pretty low. They’ve failed to score three runs in a game 17 times this season.

The bullpen has been no relief for CBU either, with only four relievers possessing ERAs less than 9.00.

“We have to be able to get some walks, and to battle with two strikes; I mean that’s our team,” coach Guilliams said. “When we don’t do that is when we struggle to score runs.”

CBU should provide VSU with plenty of opportunities to capitalize on that, especially later in games if we can get deeper into CBU’s bullpen—to some of the guys with an 11 ERA.

There will be an opportunity to get some wins and move up in the standings for VSU.

VSU is currently fifth in the GSC, but only a game out of Shorter in third.

However, with the regular season drawing to a close, the chances to get those wins to move up are fewer.

“It’s hard to win three in a row on a weekend,” coach Guilliams said. “There are six games left in the regular season; every game’s important so we just have to come ready to go.”

The series will be played at CBU in Memphis, Tennessee on April 24 and 25. The first pitch for the doubleheader Saturday is scheduled for 11 a.m., and game three on Sunday will start at noon.