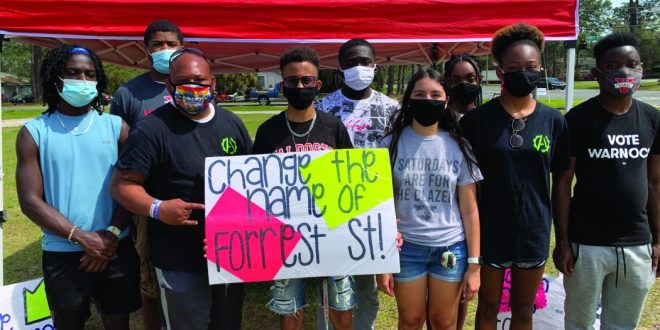 On July 22, the sociology club of VSU, A Chance To Initiate Opportunities Now [A.C.T.I.O.N.], will be in attendance at the Valdosta city council meeting where they will host a press conference detailing the results of the vote to change the name of Forrest St. to Barack Obama Blvd.

The decision to vote on the changing of the the name of Forrest St. comes after citizens and VSU students started a petition to do so.

“The street name is being changed because we [A.C.T.I.O.N.] believe that the street is named after Nathan Bedford Forrest, the first Grand Wizard of the Ku Klux Klan,” DJ Davis, the president of A.C.T.I.O.N., said.

In February, there was a forum where Valdosta citizens were invited to voice their opinion on the street name, considering its origins.

“After the meeting, a vote was given where we made the decision to change the name of the street to Barack Obama Blvd.,” Davis said.

Besides the street name change, A.C.T.I.O.N. will discuss some upcoming events with the purpose of combatting social inequality.

A few of the events will be a field trip for vaccinated students to the Legacy Museum in Alabama; the second-annual Black Live Matter vigil and talent show; the Latinx, Afr-Latinx Equality March; and The Sociology of Fathering: Why Students Should Care event.

The press conference will be held at the Valdosta City Hall after the Valdosta city council meeting beginning at 5:30 p.m.