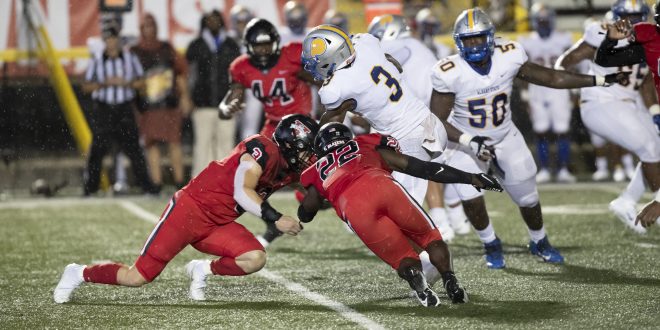 After a two-hour weather delay, No. 3 Valdosta State returned to Bazemore-Hyder Stadium to claim a 21-3 victory over Albany State.

The VSU defense was dominant with four forced turnovers and did not let up all game, only giving up three points and 65 passing yards.

VSU’s reigning Gulf South Conference Defensive Player of the Week linebacker Nick Moss had eight tackles with five of them being solo stops, while junior defensive lineman Javiontae Martin had seven tackles with one sack and two tackles-for-loss. Both defensive backs Taurus Dotson and Jaylen Jackson came up with one interception apiece.

Literally seconds before both teams took the field for the opening kickoff, the game was delayed due to lightning in the area which carried on for two hours.

VSU received the ball first and wasted no time marching down the field.

A collapsing pocket led Durham to scramble out of the pocket and turn it up field for a 34 yard gain. Durham found tight end Chris Barret on a flare pass to put up the first points of the game.

Albany State blocked a John Miller punt and had great field position, but a pass from Bonneau was intercepted by Jackson on the second play of the drive.

Early in the second quarter Albany State running back Kam Ward coughed the ball up and VSU recovered the ball once again.

Later in the same quarter, Albany State had their best drive of the game.

VSU struggled to make tackles as Albany State advanced down the field. After two big penalties by VSU, Albany State was set up on the 2-yard line.

The VSU defense held their ground, only giving up a 19-yard field goal to end the half up 7-3.

The first three drives of the second half resulted in punts, but VSU found momentum on the fourth drive, which ended with a 33-yard touchdown pass to wideout Lio’undre Gallimore.

Albany State tried to answer with a deep ball of their own, but it was picked off by Dotson.

Early in the fourth, VSU began at its own 14 and drove down to the ASU 43 when Durham hit wideout Brian Saunds for a 43-yard touchdown that led to the final score of 21-3.