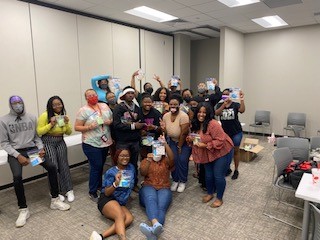 These packs contained a pad, tampon, panty liner and a piece of candy

The event was held to not only provide a unique form of community service, but to also open a discussion on periods.

Menstruation has always been an extremely taboo topic. However, in recent years, society has taken a closer look at periods and has become more open discussing them.

Other organizations that  participated in the event were VSU’s Sigma Lambda Beta Fraternity, Her Campus and Minorities in Nursing.

Sigma Lambda Beta Fraternity’s participation at this event raises a question: Why would a male organization take place in an event like this?

“We want to show that there are male orgs on campus that advocate for women,” Khyree Wright, vice president for Sigma Lambda Beta, said.

In a study conducted in 2018 by the New York Post and commissioned by THINX, an innovative period solutions company, found that 58% of women have experienced shame just for being on their periods.

Meanwhile, 42% of women have experienced period shaming. One in five of these feelings were reported to have come around after a comment from a male friend.

The New York Post also found that 44% of men have made a joke about their partner’s mood while their period cycle is taking place. Additionally, 51% of men find it inappropriate for a woman to discuss her menstrual cycle in the workplace.

“The stigma around periods is crazier than it should be,” Joshua McLean, the recruitment vhair for Sigma Lambda Beta, said. “It’s natural, and no one should feel ashamed. Guys need to stop making women feel uncomfortable for something that is natural for them. That’s dumb.”

The Gammas would like to do this event again in the future; however, with a larger amount of packs. They hope to also add hand sanitizer, sanitary wipes and medication to help with cramps.

Previous Emmy red carpet looks: the best and the worst
Next A simple guide to make it through college