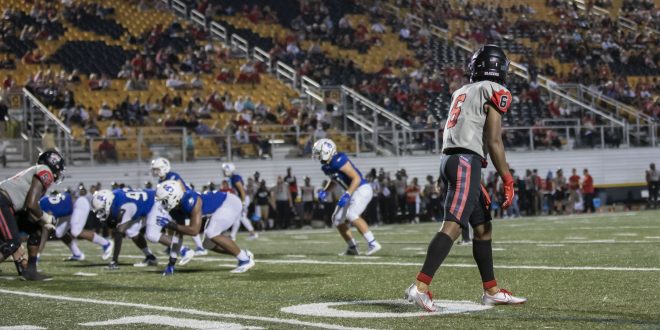 It was the ninth all-time meeting between VSU and Shorter, with VSU winning all eight previous matchups. It was also the conference opener for VSU, who is looking to win their third consecutive Gulf South Conference title.

While VSU (once again) never trailed during the matchup, they did face some adversity heading into halftime.

Junior quarterback Ivory Durham got the scoring started with a 37-yard strike to senior wide receiver Lio’Undre Gallimore.  Durham added to the scoring with a 9-yard rushing touchdown.

However, Shorter answered with two scores of their own in the second quarter. Junior quarterback Aeneas Dennis scored on a one-yard run to trim the lead to 14-7.

The Hawks added another touchdown via a 28-yard pass from Dennis to sophomore defensive lineman Tony Bethea, failing on the two-point conversion to make the score 14-13. A missed field goal by VSU in the final seconds of the first half gave Shorter even more momentum heading into halftime.

“We missed a couple of assignments there in the second quarter,” Gary Goff, the VSU head coach, said. “I told the guys in the locker room to calm down and relax.”

Goff also said he stressed having sustained drives during halftime.

“We only ran 29 plays in the first half and weren’t having sustained drives,” Goff said. “We were having these short drives where we’d score within a few plays and putting a lot of pressure on our defense by not letting them rest.”

The second half belonged to VSU as they leaned heavily on their ground game. VSU would score on the ground three times as part of the 35-point second half.

The defense also stepped up in the second half, limiting Shorter to just 49 yards. The defense was able to seal the deal with a pick-six by defensive back Christian Matthews, a VSU graduate transfer.

“We were actually trying to speed the game up in the second half,” Goff said. “We wanted to spread the ball around and get our playmakers involved.”

VSU will once again be at home on Oct. 9 at 7 p.m. for the final game of their three-game homestand as they take on Delta State for their Pink Out game.