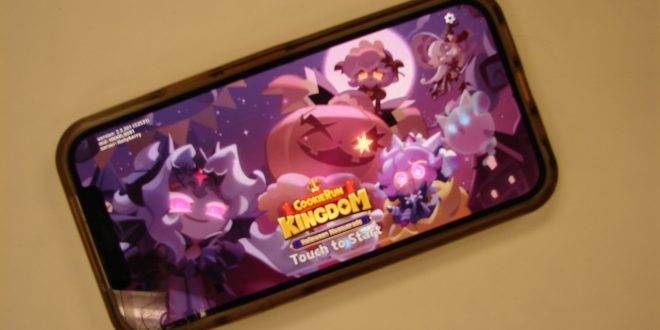 Trends come and go, but one trend that has stayed since the dawn of cell phones is mobile games.

Whether it’s Pong or Flappy Bird, these games have been staples and found on most phones today.

The Ovenbreak franchise has been around since 2009 and has stayed popular since its creation. Their newest game, however, has taken the internet by storm.

‘Cookie Run: Kingdom’ is the newest installment from DevSisters, an MMORPG based around the story of sentient cookies who have to recreate a fallen kingdom and defeat an evil enchantress.

You gain money and diamonds, unlock new cookies and defeat different maps until you complete the story. It seems like a run-of-the-mill mobile game, but this one has gained traction faster than any other game in 2021.

There are several factors as to why this could be so. To start with, the voices of the different cookies include a star-studded cast of characters from different shows and movies who are easily recognizable.

The game itself is based on a long-standing franchise that provides a kick of nostalgia to players of Ovenbreak and its sequels. But one thing that has stood apart from it compared to other games is its fan base.

Fan culture has influenced the popularity of ‘Cookie Run: Kingdom’ immensely, creating a culture around the game similar to television or other games.

Different demographics of art and media have been posted within the first few months of its release, and with this has come more people to see what the commotion is about. In a way, the game markets itself.

Another good reason it is trending right now is nostalgia. Ovenbreak was first released in 2009, and since then has inspired six spinoffs from the creators, all of which gained a decent following.

Gingerbrave, the main character, is not a new character; he has been featured in all games as the star, and is a familiar face to people who grew up in the early 2000s and got their first phones at the height of its popularity.

The combination of nostalgia, a good fanbase and good worldbuilding has made this game wildly successful. With a range of activities to keep players occupied, it makes for a perfect time-waster in between classes or on the way to activities.