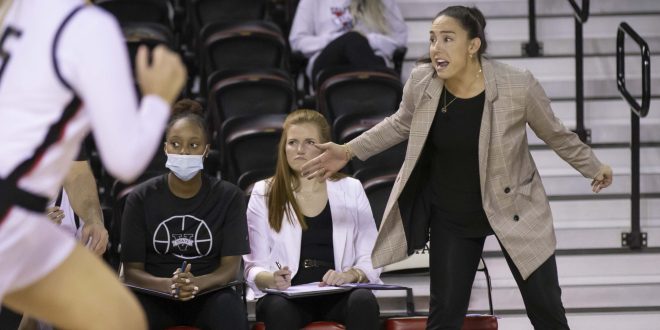 The win over Christian Brothers also gave head coach Deandra Schirmer her 50th win in just her third year at VSU. She is the fourth-fastest Lady Blazer head coach to reach that milestone, doing so in just 67 games.

The Lady Blazers started off red hot against the Lady Buccaneers, shooting 50% from the floor (9-18) and from three-point range (4-8) to build a 24-13 lead at the end of the first quarter.

The streaky shooting continued into the second quarter, as the Lady Blazers knocked down five more threes, again shooting 50% from range. VSU also shot 45% from the field in the quarter as they built a commanding 49-25 halftime lead.

The Lady Blazers weren’t done, however. They continued pouring it on in the third quarter, scoring a whopping 28 points in the period.

While the Lady Bucs did get things rolling on offense during the quarter, they still found themselves down 77-47 entering the fourth quarter.

The Lady Blazers were on cruise control in the fourth quarter, outscoring Christian Brothers 24-15 in the quarter to put the game on ice.

For the game, VSU shot 49.3% from the field and 42.9% from three-point range while holding Christian Brothers to 34.4% and just 21.4%, respectively. The Lady Blazers also set season highs in points, field goals made (36) and assists (25), among other stats.

Defensively, the Lady Blazers were relentless, recording 8 blocks, which was also a season-high, and 7 steals. Sophomore Tamiya Francis was responsible for four of those steals.

The second quarter saw the Lady Blazers get scorching hot as they built up a 35-22 halftime lead. The Lady Blazers went 9-14 from the field and 2-3 from three-point range while holding their opposition to 4-12 and 1-6, respectively, to take control of the game.

Unfortunately, that lead would not last.

VSU went ice cold shooting in the third quarter, making just 23.08% of their shots. That, combined with the Bulldogs shooting 54.55% for the quarter, allowed Union to make it a two-point game heading to the fourth quarter.

While VSU did get back into rhythm in the fourth quarter, they could not hold off Union’s second-half rally, getting outscored 20-15 over the final ten minutes.

Three Lady Blazers finished the game in double digits, with graduate student Kwajelin Farrar leading the way with 19 points. Heyn and Francis each finished with 11 points.

The Lady Blazers will be on the road once again on Jan. 26 to face Benedict in nonconference action before returning to The Complex on Jan. 29 to face West Florida.