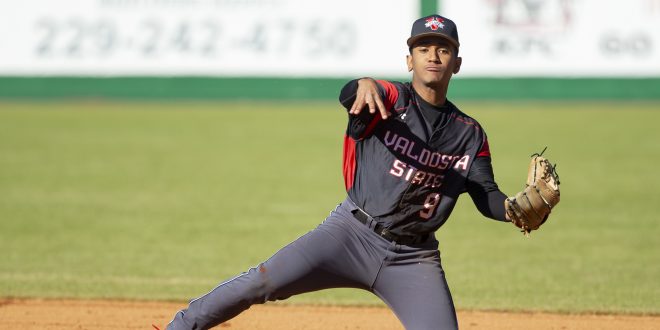 It’s a new season and a new squad for Blazer baseball. The 2022 regular season starts on the road for the Blazers with a three-game weekend series on the road at Embry Riddle, starting on Feb. 4.

The team just wrapped up their preseason in a losing effort against Tallahassee CC on Jan. 23 to go 3-2 in preseason.

Last year, the team went 25-16 with a 22-13 mark in Gulf South Conference play, good for a fourth-place finish in the regular season. The Blazer’s season ended with a day three loss to Lee at the GSC tourney in Oxford, AL last spring.

The 2022 Blazers were voted fifth in the conference preseason coaches’ poll, but this team will look a little different than last year’s squad, however.

Last year, it was the offense that powered the Blazers who finished at or near the top of the conference in most offensive statistics. Their 268 runs were the third most in conference play, but over 200 of those runs have graduated or transferred from the Blazers.

Losing all-conference guys like David Mayberry, Tristan Cone and all-American, Nick Lewis is certainly going to be a set back for any team, but head coach Greg Guilliams said they have some strong additions.

“Even though we lost some really great players, I think that the new players coming in fit really well with the players we already had coming back,” Guilliams said. “I can say, when I look at our team that’s out on the field, I don’t think that there’s really a weakness.”

The Blazers lost the meat of their outfield rotation, which last year was the strength of the lineup, as well as the middle of their infield, but there are some key returnees at the corners.

Like junior first basemen, EJ Doskow, who started 29 games for the Blazers last year and was second on the team with six homers to go along with a .298 batting average.

The Blazers are also getting graduate student Mike Christopoulos back at third base after missing last season due to a leg injury. Christopoulos was one of the best hitters on the team during the COVID-19 shortened 2020 season and enters 2022 as the team captain.

“He’s pretty close to 100% now, and I mean he’s an all-conference type player so it will be big to have him back,” Guilliams said.

Guilliams expects the newcomers to gel with the returning talent and create a formidable unit for opponents to pitch and hit against.

“When I look at our positions players, I think everybody out there is a good player and should perform well,” Guilliams said. “Our position players are very talented, and we have some depth there.”

As previously mentioned, all the offensive production the Blazers have to replace – most of that came from the top of the lineup, with guys like Lewis, Mayberry, Ben Rowdon and Chase Coker batting in the first five spots and accounting for 143 runs.

To Guilliams, the keys to replacing that production this year comes from their depth, as well as a little more speed this year.

“I think this year we’ll be able to hit more from the top to the bottom and there’s more speed,” Gulliams said. “What happens is when you have two or three really great hitters – and I thought, last year we did – if those couple of those guys are off, you could struggle scoring runs. Where I think when you’re more balanced, when you have those days, you’ve got other guys that can pick them up.”

The Blazer’s newfound depth begins at short stop with newcomer, Ryan Romano. Transferring from Florida State, Romano has some big shoes to fill. The Blazer’s previous short stop was Nick Lewis, a first team all-American who led the Blazers in hits, runs scored, total bases and others.

The Blazers new outfield also has a couple guys that look to contribute in big ways. David Crawford gives the Blazers more of the speed Guilliams was talking about. The junior is batting leadoff and playing center field for the Blazers this year, so his speed will be critical.

Bryson Gandy is another new outfielder that Guilliams expect to contribute for the team. The junior out of Troy, AL brings good hitting and more speed to the Blazers.

The Blazers return a heap of bullpen arms, but as far as starters go the only returner is senior left hander Elijah Gill. Gill started 13 games for the Blazers in 2021 with a 2-5 record and was second on the team in innings pitched.

Despite the number of arms coming back and a couple big names coming in, Coach Guilliams said “Pitching wise, that’s my concern. As of right now, I haven’t seen who’s going to step up into some of the roles.”

Guilliams said a big part of that is the injuries that have gutted his rotation before the season has even started.

“If we had everyone healthy, then it could be a strength, but when four of your top six or seven arms are out for the year…” Guilliams said.

Last year’s closer, senior Jacob Barker is out for the year, as well as one of the Blazers top recruits coming in, a junior out of Palm Beach State College, Zach Dodson.

Guilliams and the Blazers are hoping to get another one of their injured arms back before too long. Adrian Garrastazu, a graduate transfer from the University of Jacksonville, could be one of the most important players for the Blazers on the mound this year.

Though there is a lot of turnover, Guilliams knows this year’s team will still play hard and embody the same values as his other Blazer baseball teams.

Previous VSU inducts seven into Athletic Hall of Fame
Next Opinion: The dawn of free agency in college football