Home / Entertainment / When We Were Young festival or Fyre Festival 2.0? 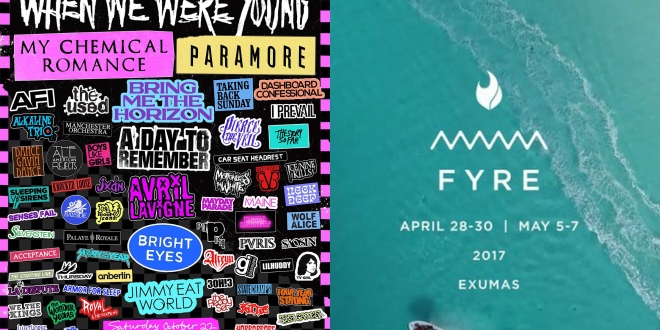 On Jan. 18, Instagram user @whenwewereyoungfest posted a new photo of the lineup for the upcoming summer music festival ‘When We Were Young.’

While these bands scream nostalgia to millennials and emo kids everywhere, people can’t help but question the legitimacy of this festival. Most are comparing the festival to the controversial music festival ‘Fyre Festival.’

When people arrived at Fyre Festival, it was clear that it was the product of a scammer. The advertisements for the festival were nothing like the actuality of what they showed up for.

No performers, no tents for guests to camp in, no running water and no cell phone service on this “private island” amongst other major issues. Flights were canceled, leaving passengers practically stranded at this nonexistent music festival for the weekend.

When We Were Young festival offers tickets that cost a little over $300 for non-refundable tickets. But these tickets have a down payment of $19.99, that music lovers just can’t resist.

But if your flight gets canceled, you come down with COVID-19 or the festival gets canceled due to COVID-19, there is no backing out. You are just stuck with your overly expensive festival ticket for life.

This festival has also not announced any sort of COVID-19 safety protocols, such as requiring masks, vaccinations or proof of negative COVID-19 results.

This is seen as problematic for the guests, performers and concert staff. With guests paying that much for tickets, you would think that they should be able to count on coming home without a viral infection, right?

Besides that, the venue is also not allowing outside water and sunscreen, forcing the guests to buy it inside the venue. Are the people running this festival money hungry? Good question.

What a coincidence that said “people running this festival” is Live Nation, the same company that organized AstroWorld, the festival that left 10 attendees dead and injured in 2021.

Live Nation is currently facing multiple lawsuits because of the tragedy that the festival caused. Because of that, many can’t help but question if this will just be another repeat of the past.

In the beginning of the company first announcing the festival, it was originally set to only have one day where all 65 acts would perform on three stages.

Since posting that, Live Nation has announced two more days that have already sold out and will have the same performance for every one of those days. That means those 65 acts will be performing for three days on the same three stages to thousands of festivalgoers.

While many people are extremely suspicious of this festival and the terms that come along with it, there are enough people going for the festival to have sold-out shows.

Whatever concerns people the most about it does not matter to the other half of people, and they may be risking it all for the sake of nostalgia.

Is it really worth it?