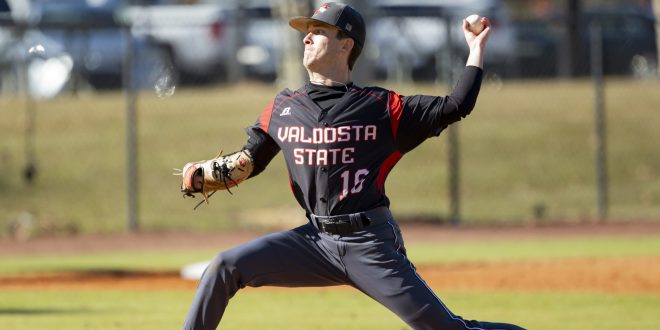 The VSU baseball team kicked off the 2022 season with a pair of wins at Embry Riddle on Friday. However, the Blazers failed to secure the series sweep, falling 1-0 in the eleventh inning of game three on Saturday.

Left-handed senior pitcher Elijah Gill guided the Blazers to a 3-2 victory in game one. The senior is a key returning piece for the Blazers, so it’s important that he start the 2022 campaign off right.

And he did, allowing no runs and only one hit in the first six innings against the Eagles, while also striking out nine and walking only two.

Another big returning arm for the Blazers, junior, Zach Henderson, came in for the save after the Eagles made a push in the seventh and final inning.

Gill had left the Blazers with a 3-0 lead going into the last inning with the help of a two-RBI double from junior first baseman EJ Doskow.

However, the first two Eagles’ batters got on base at the top of the seventh, as sophomore pitcher Scott Curran was pulled after not even facing the minimum.

Henderson came on but couldn’t hold the runners. However,  he kept enough of them from scoring for the Blazers to hold on to the lead, taking a 3-2 win the first game of the series and grab their first win of the season.

The Blazers needed their pitching to hold it down in game one. In game two, their bats came alive early and often, as the Blazers opened with four runs in the first inning before cruising to a 13-5 win.

Doskow’s hot hitting from game one carried over into the second game, leading the way for the Blazers offense again. He got the Blazers on the board in the opening frame by booming a 2-RBI double to center field.

It was also Doskow’s two-run blast over the left field wall in the seventh inning that put the Blazers up 9-0, the biggest lead of the day.

Before the day was over, Doskow had racked up six RBIs and scored a pair of runs, hitting 4-7 with a homer across both seven inning games of Friday’s doubleheader.

Senior Luke Ard, who spent his time on the mound for the Blazers last year, knocked in two more runs.. However, he was the only other Blazer to score more than one run. It was all the walks the Blazers drew that really hurt the Eagles.

The Blazers walked five times in game two, with each baserunner crossing home plate. The Blazers were able to score 13 runs on only eight hits.

The Blazers’ bats went cold on Saturday as they went scoreless through 11 innings in a 1-0 loss to the Eagles.

The Eagles’ pitching staff was able to overcome a couple of errors and five hits by playing timely defense and stranding Blazer runners.

However, the Eagles broke through in the 11th with three straight singles off Henderson in his second overtime inning in relief.

After the series against the Eagles, the Blazers will next take the mound against Nova Southeastern University next Friday, Feb. 11kicking off their weekend in south Florida.

After playing NSU in Fort Lauderdale, Florida, they’ll travel to Miami Shores to play Barry on Saturday and then play Lynn in Boca Raton Sunday.

After that, the Blazers finally play their home opener on Wednesday, Feb. 16, against Saint Leo University.