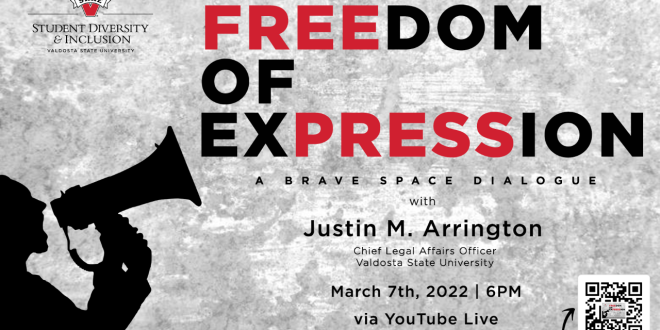 The Office of Student Diversity and Inclusion held a YouTube live on Monday at 6 p.m. called Freedom of Expression: A Brave Space Dialogue.

The dialogue discussed how the first amendment relates to students, faculty and staff and what to do when being targeted by someone’s right to free speech as a response to the protestors who have been coming to campus to spread their message.

Sandra Jones, the VSU director of Student Diversity and Inclusion, and Justin Arrington, the Interim Chief of Legal Affairs officer for VSU, spoke at the dialogue.

Jones wanted to remind students that this isn’t a new thing for VSU’s campus. Over the past two years, COVID-19 has kept people away, but now people are starting to show up again. Since then, the student body has changed and aren’t used to this expression of free speech.

Even people who aren’t associated with the campus can come and voice their opinions, within certain guidelines and parameters.

“Any time you start to restrict something; it has a boomerang effect,” Jones said in response to the student’s wanting to restrict the speech of the people coming to campus.

Arrington went over what is protected in the first amendment and pointed out that speech that can be considered hate is included. He reminded viewers that instead of this being a bad thing we can use it to incite conversation between our peers.

This dialogue allowed students to ask questions to Jones and Arrington about how they could assist and make conversations when these protests happen again on campus.

In response, the speakers assured that students should keep up with conversation beyond the day of the protests and that it doesn’t end after the speakers leave.

Questions can be emailed diversity@valdosta.edu or brought to the Shannon Center on the third floor of the Student Union.

For the complete discussion, the video is still available to be viewed on VSU’s YouTube channel.

Previous Blazers fend off Falcons, win 2 of 3
Next Annual Azalea Festival Comes Back to Valdosta