Home / News / Gas Prices Are Rising: Blame it on the Pandemic 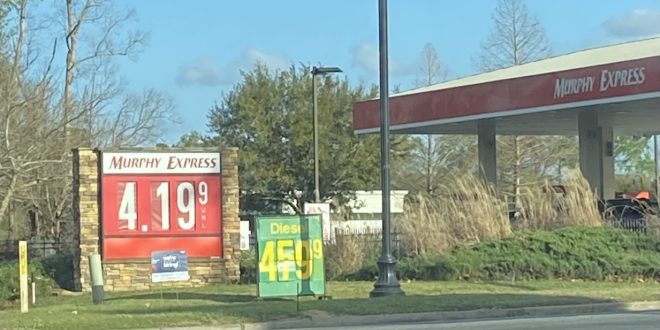 Gas prices at Murphy Express on Inner Perimeter set at $4.19

Gas Prices Are Rising: Blame it on the Pandemic

Gas prices in Valdosta, Georgia have been increasing as a result of the fluctuating supply and demand for oil since the start of the COVID-19 pandemic with the addition of the effects of Russia’s War on Ukraine.

Valdosta locals and VSU students have all been paying the price to drive. However, gas is not the only resource that has been increasing lately, and it is all an outcome of inflation.

When the pandemic first began, people were traveling less and staying in their homes causing the demand for oil to decrease, causing gas prices to become cheaper.

According to Aimee Picchimn, a CBS News reporter, prices plunged to an average of $1.94 in April 2020 due to a sharp decline in demand for gas. Since the country has stopped being on lockdown and vaccines have been introduced to the public, people are becoming more comfortable traveling which has been the cause in the increasing demand for oil.

The surge in gas prices has not only been a stretch for our gas budgets, but for some students it has caused them to make accommodations.

“I’ve had to switch [to the car] that takes cheaper lead as well as adjust my monthly budget,” said Ebony Simon, a VSU political science major.

Other students have shared similar experiences.

“I usually spend $25 to fill my tank and now it’s about $40 sometimes. So, I’m a really disappoint because now that’s less money that I have to spend on groceries,” Lily Hines, an art major, said.

This issue not only affects the student who are drivers, but also affects those who use ride sharing and delivery apps. According to Levi Sumagaysay in a MarketWatch article, Drivers of these companies are getting paid more to compensate for the increase in gas prices, while riders or shoppers are paying more to balance out that expense.

With Russia’s war on Ukraine happening even during a pandemic, it is clear to see the effects that these events are having on the nation’s economy.