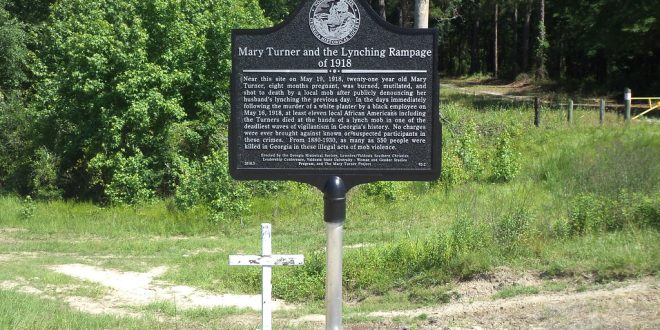 A rally was held on Troup Street on Saturday, March 26 in support of renaming the street Mary Turner Street.

Mary Turner was a pregnant black woman who was lynched by a white mob in Brooks County, Georgia in 1918 in result of protesting her husband’s lynching that had happened the day before. The mob hung her by her feet from a tree, burned her clothes off and while she was still alive, they cut her baby from her belly, crushed her baby then riddled her with bullets.

The street is currently named after George M. Troup. Troup was a Georgia politician in the 1800s who supported native Indian removal and slavery throughout his career.

VSU’s A Chance to Initiate Opportunities Now, or ACTION, organization organized the rally and was led down the street by two police officers. Protestors could be herd yelling “Down with Troup Street.”

J. Davis, vice president for ACTION and a master of arts in sociology student, lead the group of protesters in the rally.

“The purpose of wanting to rename the street is to tell our history correctly, and that starts with changing the symbols and signs that divide us,” said Davis.

Davis said that to show we no longer believe in the values represented by people like Troup, we must take away signs and symbols that reflect that.

He said that students have a responsibility to take part in what’s happening in the community even if they don’t live here. For the four years students attend VSU, the local government policies directly affect school policies and will then affect them.

Dr. Thomas Aiello, a VSU professor of history, attended the rally and said he was surprised by the low attendance.

“Many people support the effort to change street names and remove other Confederate legacies from Valdosta, but they only support such things in the abstract,” Dr. Aiello said. If there’s no participation, then there cannot be change.

Dr. Aiello said that while people should only participate in these movements if they truly believe in them, if they understand these histories, it will make them better people which produces a better society.

Even though there was a low attendance, Davis was happy with the support of the students and the number of organizations that were represented there.

“It is crucial, from a historical standpoint that such injustices remain prominent in public memory to serve as a reminder of the difficult history of this city and nation,” Hennessy Arnold, a senior political science and computer science major, said. “Having the street renamed in her honor would be a testament to the progress this city has made in the fight against inequality.”

In this same way, we should honor Mary Turner and look to her history not as a tragedy but as someone who stood up for what they believed in no matter the consequences.

Tyler Hooks, a senior communications major, said, “I don’t see why it shouldn’t be renamed. It’s important for streets to have a historical meaning.”

The renaming of the street cannot move forward until the city lifts one of their ordinances and money can be raised, but ACTION is working on other projects in the meantime.