Home / Entertainment / “Stranger Things” review: back into the Upside Down 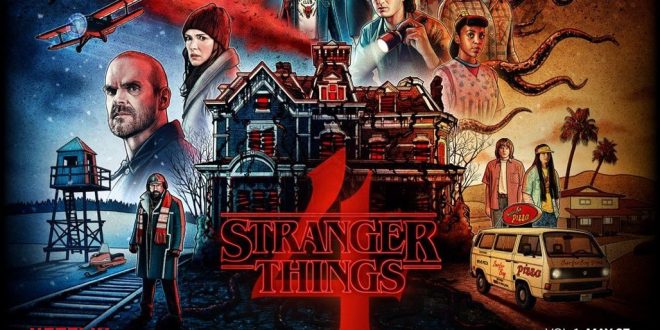 “Stranger Things” is back, and with it came a new cast of characters and a twisted dark side.

Season four picks up with a time jump to January 1986, a few months after the closing events of season three.

In season four, the Hawkins gang has officially begun their freshman year at Hawkins High School. Despite their close bonds in earlier seasons, the Byers departure to California at the end of season three posed some trouble: This close-knit group of friends officially find themselves drifting apart.

However, after a Hawkins student is killed by an unseen force from the Upside Down, the gang has to find their way back to each other to not only save Hawkins, but the world.

This season was a lot, and I mean that in the most ambiguous way possible.

It’s much more intense than previous seasons, especially in the aspect of gore. While it isn’t anything like watching a classic slasher film, the level of violence this season is nothing I’ve seen from “Stranger Things” before.

However, unlike previous seasons where the creatures from the Upside Down mainly come as physical threats, this season’s “big bad” solidifies an area of the story introduced in season two: psychological terror.

As “Stranger Things” fans may recall, the Mind Flayer – season two and three’s common enemy – used Will (Noah Schnapp) to see outside of the Upside Down and Billy (Dacre Montgomery) to carry out his violent acts.

I’ll say this: If the Mind Flayer was “Stranger Things” attempt to dip their toes in the waters of psychological horror, season four’s Vecna (Jamie Campbell Bower) was the cannonball.

Vecna shares one similar trait with the Mind Flayer, which is the ability to get inside someone’s mind. However, while the Mind Flayer was more of a possessor, Vecna paralyzes his victims where they stand, essentially holding them in a comatose state.

The Mind Flayer, as shown in season three, needed a host to kill his victims. Vecna, however, attacks from his place stationed in the Upside Down, spending days or even weeks taunting them with the darkest parts of themselves before finally ending their lives.

Vecna’s introduction allowed the show to branch into a newfound level of horror – probably my favorite genre of horror – and I can’t wait to see how they continue with it in volume two.

The definite steal of this season, however, came from the acting, especially Sadie Sink in her role as Max Mayfield.

Sink has shown her strength as an actress since she first came to the show in season two, but season four has solidified her role in ways the previous seasons haven’t.

From her sarcastic one liners to her dramatic run to Kate Bush’s “Running Up That Hill” during her escape from the Upside Down, Max was hands down one of the best characters to come from this season, and Sink stole the show.

I’m honestly at a loss for words when it comes to her performance this season. That’s how good it is. I’m expecting an Emmy nomination.

The next best character to come out of this season was Eddie Munson. Played by newcomer Joseph Quinn, Eddie heads the Hellfire Club, Hawkins High School’s Dungeons and Dragons group.

Quinn, despite being new to the show, has delivered one of the best characters to come from “Stranger Things.”

His comedic acting and witty character is a breath of fresh air surrounding the seriousness of the season. Every time he came on my screen, I felt like I could stop sitting on the edge of my seat and take a few seconds to recoup.

The cinematography of this season also deserves some praise.

“Stranger Things” already has amazing cinematography. The CGI and work put into the Upside Down is iconic and has been since season one.

However, the lighting and camera work this season definitely wins. From the warm, dark tones setting intense moods to the cool, bright tones during slower scenes, the lighting shows give a visual look into the working of the characters and the events they are thrown into.

Meanwhile, the camera work is exceptional. There are a few times in the season where the camera will spin from one spot in the overworld to show the exact same spot in the Upside Down. It is much more detailed and lucrative this season than in the past.

Overall, “Stranger Things” has gone off the rails with season four, but in a good way. It definitely lives up to the hype surrounding its long-waited release.

The first seven episodes of the season are currently available for streaming on Netflix. The final two episodes are scheduled to be released on July 1.

Previous Column: gun violence should be stopped after Uvalde shooting
Next The Queen is back, and she’s already pulling the unexpected!