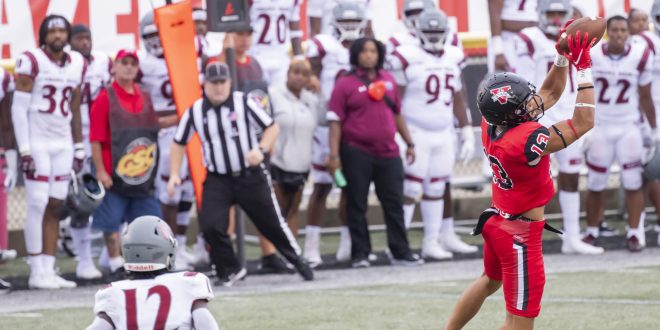 The No. 13 VSU football team (2-1) kicks off Gulf South Conference play with a trip to Shorter (2-1) for their second leg of their three-game road trip.

This game will be the first of two meetings between the Blazers and the Hawks. Shorter will visit the Blazers on Nov. 12 as part of the GSC Playoff Preview.

Although Shorter has been a bottom-dweller in the GSC in recent years, head coach Tremaine Jackson believes that the Hawks are a much improved team, particularly because of their tight ends.

“That Shorter football team that we’re about to play is really good,” Jackson said. “They’ve got two really big tight ends. They would be like Gronkowski and whoever else is a great tight end on the same team. Those are really good players, and for them to beat Valdosta State, that would really solidify their season.”

Additionally, despite the Blazers dominating the series as of late, Jackson says his team is not worried about the past.

“The audacity for us to think we can beat anybody is what we tell our players,” Jackson said. “How dare we say what somebody’s been when we don’t even know who we are? We’re brand new together. I think the motivation has always been seeing what we are, regardless of the opponent. The only team that can beat Valdosta State is Valdosta State. …We don’t underestimate anybody.”

Still, Jackson knows there is plenty of room for improvement, especially with the Blazers entering conference play.

“When you’re coaching, you analyze it and you look at what you miss, and we missed some things,” Jackson said. “We want to clean some of that stuff up because we felt like we could have done more that night. We’re trying to get ready for a really tough conference. …When you’re trying to get ready for what I believe is the best conference in Division II, you want to make sure you’re cleaning up a lot of things.”

Jackson was particularly pleased with the running game. The Blazers racked up 341 rushing yards as multiple running backs got ample playing time.

“I think anytime you got a couple of guys that can run the football, you’re pretty good,” Jackson said. “What was really good was that guys like Travis Tisdale and James Chaney got in the game, and they were able to continue the run game. We feel really good about our run game.”

As for Shorter, the Hawks suffered their first setback of the season last week in a 42-20 loss to No. 17 Albany State. Despite the loss, the Hawks had nearly 300 passing yards.

The Hawks will provide another test for the Blazers’ defense, which is still trying to find an identity.

However, Jackson has faith that the changes they’ve made following the loss to Virginia Union will help the team gain confidence throughout the season.

“We put the training wheels on, and we’ll keep the training wheels on until they’re ready to ride,” Jackson said. “We changed some things structurally. We tried to put extra hitters on the field. We had to realize and I had to realize that we haven’t been together that long. …We specialize in defense, but it doesn’t happen overnight. We want to make sure we put our players in the very best position to make plays and build as we go throughout the season.”

Previous Editorial: Students deserve a voice in future changes
Next Column: The risks of cancel culture