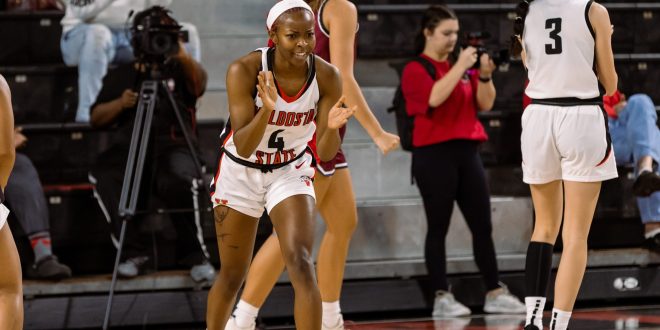 After facing a pair of top 25 teams to open up the season, the VSU women’s basketball team had a less daunting matchup with Shorter coming to town.

However, Schirmer believes that the team was going for steals, allowing Shorter to get open looks and build an early lead.

“Well, I think in the first quarter we gave up way too many points because we were overcommitting and we were hunting steals too much,” Schirmer said. “We talked about how you got to be disciplined and then the steals will come. I think this group is still learning how to play together and how to still stay disciplined and not give up wide open looks but also be aggressive defensively.”

The message was heard loud and clear.

Shorter was only able to score two points in the second quarter as they went 1-10 (10%) from the floor and 0-5 from 3-point range.

The Lady Blazers lit up the scoreboard in the second half from range. The team went a scorching 9-16 from 3-point range.

The second-half surge was fueled by junior guard Tamiya Francis, who scored 8 of her 13 points in the third quarter. Francis also made two 3-pointers in the quarter as the Lady Blazers took a 58-33 lead into the fourth quarter.

Sophomore guard India Jordan took over the fourth quarter, knocking down two 3-pointers and scoring 14 of the Lady Blazers’ 23 points in the quarter. She finished the game with 15 points and two steals off the bench.

Schirmer thought the team’s ability to hit threes helped wear down Shorter in the second half.

“I think in our game we don’t have any dunks,” Schirmer said. “And so when you hit threes, it’s kind of like the equivalency in the women’s game because you not only score points, but it also kind of demoralizes the other team. And so [when] we’re rattling off a lot of threes, it starts to crumble down for the other team.”

Turnovers also played a big role in the game. After having over 20 turnovers in their first two games, the Lady Blazers had just 14 on the afternoon, including just five in the second half.

Shorter more than doubled that mark, finishing with 30 turnovers. That included 20 steals by the Lady Blazers.

Schirmer said she talked with the team at halftime about limiting turnovers, believing that some players are trying to do too much on offense.

“I think for our group, we’ve relied so long on certain players that are no longer here for scoring on offense,” Schirmer said. “So now, we feel like some players are trying to do it all by themselves, and we talked about it at halftime. People are standing wide open, people are teeing off, and thankfully, the people that were teeing off were hitting shots. … So that was something that, [we should be] making the easy pass and not trying to make a tough play.”

The Lady Blazers finish off their four-game homestand against Georgia Southwestern on Nov. 22 at 6 p.m.