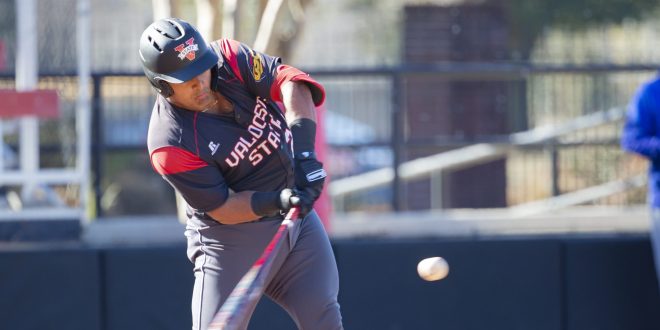 The Blazers spent the weekend in south Florida, playing three games in three days in three different cities. They dropped two of three games to return home 3-3 on the young 2022 season.

VSU started strong against the Sharks of Nova Southeastern University (6-0), but miscues added up for the Blazers as the hot hitting Sharks made them pay. In the 13-3 drubbing, eight of the Shark’s runs were unearned.

The Blazers got on board first as junior EJ Doskow hit a two-run blast in the opening frame that capitalized on a Shark’s error where they let the Blazers’ leadoff batter on.

However, the Sharks capitalized on errors when Blazer third baseman Mike Christopoulos failed to corral what could’ve been a double play ball to get them out of the inning. Instead, the next batter rifled a ball past the short stop for an RBI single up the middle to make it 2-1.

Senior pitcher Elijah Gill got the Blazers out of the inning but not before a second error from his infield loaded the bases.

The Blazers finished with five errors in the game which really hurt the Blazers as the Sharks started to pile on runs as the game went on.

The Sharks had a big third inning where they benefitted from a handful of missteps from the Blazers. Gill, who led the Blazers in strike outs last year, struck out the leadoff batter, but the next three batters would all make contact.

Shark’s Designated hitter Daniel Irisarri reached first thanks to Ryan Romano’s second error at short. Then, Gill induced a fly ball to centerfield where junior David Crawford for what should have been the third out in a 1-2-3 inning.

It wasn’t however, as a single to center and advanced Irisarri to third, where he would stand and wait for a couple pitches before one got away from Gill, and he could sprint down the line to score.

Gill walked that batter and the next to load the bases for one of the Shark’s most dangerous hitters, Tyler Epstein.

Epstein made the Blazers pay for their miscues with a bases clearing double down the third base line to score three more unearned runs in the inning.

The Blazers bats went cold after the first inning as they recorded just one hit until the sixth, but they found themselves in prime position to cut into their deficit in the fifth inning.

Shark’s starter, Matt Kavanaugh, had found his groove but with a walk and an error, the Blazers suddenly had two on and none out. But as the next two batters struck out the Blazers saw their opportunity fade away as quickly as it appeared.

That was Kavanaugh’s last inning, he finished with four strikeouts and one walk, allowing two runs in five innings.

The Blazers were able to get a runner in scoring position again the next inning as Sharks reliever Jarret Krzyzanowski threw four straight balls to Doskow leading off and then advanced him to second with a wild pitch.

Christopoulos made it count with a hard-hit ball to right center for his first RBI of the season. He had to make sure to hit this one out of the reach of the Shark’s rangy center fielder, Stephen Schissler, who had already robbed Christopoulos of an earlier hit with a diving catch.

The Blazers one run at the top of the sixth inning cut the lead to 6-3, but the Sharks recorded their second four-run inning of the game in the bottom of the sixth to blow the game open at 10-3.

They scored another run in the seventh off a solo shot, and two more in the eighth thanks in part to another error from the Blazers’ infield.

The Blazers loaded the bases with two outs in the top of the eighth, but nobody was able to make it across home plate as the Blazers fell 13-3.

The Blazers managed only four hits against the Sharks, led by two and a walk from Christopoulos and the home run by Doskow.

In four innings of action Gill struck out four and walked three, while allowing seven hits on 102 pitches. He also allowed six runs, but only one counted as earned. He improves to 1-1 for the Blazers this season.

The Blazers got out to another hot start on Saturday as they blitzed Barry starter, Mike Reagan, for four runs in the opening frame on the way to a 11-3 bounce back victory.

It was a group effort from the Blazers where nine different players recorded a hit and six recorded at least one RBI.

Doskow led the way with four RBI, notching two in that big first inning with a double and two more with another double in the fifth.  Doskow’s 13 RBI lead the team and are tied for the Gulf South Conference lead.

Jakob Sessa’s second double of the game in the second inning scored the fifth run for the Blazers, but the Bucs responded with a run of their own in the bottom of the inning.

That run was the only run allowed by Sophomore right-hander JJ Finn, who got the start for the Blazers on Saturday. Finn went six innings, striking out two and allowing eight hits. He improves to 2-0 with a 1.6 ERA through 11 innings so far.

Junior Zach Henderson came on to relieve Finn in the seventh with a cushy 11-1 lead. The Bucs managed to turn a walk into a two-run blast on Henderson that inning, but that was it for the home team as Henderson and graduate student Adrian Garrastazu closed the game out.

Preston Joye and Luke Ard both had big days in the middle of the order for the Blazers, each going 3 for 5 with an RBI on the day.

The Blazers dropped game three at Lynn as the Fighting Knights pulled ahead late to win 8-5.

It was anybody’s game going into the eighth inning after the Knights tied it at 5-5 with a sac fly in the seventh.

Preston Joye got the Blazers on base with no outs to start the inning, but he made a costly mistake on the base paths as Ralph Morla Jr. grounded out in the next at bat and left the Blazers with 2-outs and none on-base.

It was again the unearned runs that killed the Blazers. Blazer reliever, Brandon Raiden, struck out the first batter of the inning but behind the plate, Morla didn’t catch the pitch cleanly, and the Knights leadoff man found himself on first.

The next batter got on with a single and then a new Blazer pitcher stepped on the mound for the first time, sophomore Nick Ferrara.

The right-handed hurler struck out his first batter, but his second at-bat didn’t go so smoothly, as J. Rosselli came on to pinch hit and blasted a three-run home run that put the Knights on top 8-5.

Ferrara got the Blazers out of that inning without allowing anymore runs, but the Blazers found themselves with their backs against the wall at the top of the ninth down three runs.

It was a hole they weren’t able to dig themselves out of as the ninth inning ended for the Blazers with three quick outs.

Doskow’s hot hitting weekend continued with two more hits and an RBI single in the fifth for the Blazers, who, as a team got on base a lot, but weren’t able to capitalize and score enough runs to beat the Knights, who improved to 6-1 on the season

Kevin Thomas got the start for the Blazers, his second on the season, as well as his second no decision, despite allowing four runs on four hits. The junior right-hander struck out two and walked two in his five innings of action.

After going 3-3 on the road to open the season, the Blazers will finally play in front of a friendly crowd this Wednesday, Feb. 16 as they open the home slate of games for the 2022. The nonconference game against Saint Leo University will start at 5 p.m.