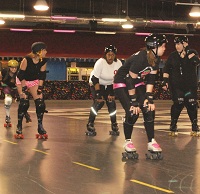 Picture the women you see every day—teachers, single moms, nurses.

Now picture those same women, skating around a rink at full speed, determined to knock each other out of the way.

That’s exactly what the ladies of the Valdosta Venom roller derby team are all about.

Lisa Gray, a skater known as RX Queen, is a single mom and works in a hospital.

Ginger Corriell, or Bernie Wreckster, is a seamstress.

Jessica Williams, also known as Hardbody Rock, is the team captain and during the day serves as a social worker.

Melissa Johnson, the owner and founder, also known as Jinx LaRue, works in the legal field.

Growing up in the rink, Jinx was no newbie.

“I was a rink rat,” Jinx said. “That’s the proper term. Every Friday, Saturday, Sunday—Wednesday, I even went to the Christian skates just to get in extra skating when I was younger. I lived there.”

Jinx was able to find love in a sport that already fit her personality. The sport also brought together women from all different walks of life. “This sport typically is full of misfits that don’t really fit into one type of genre,” said Jinx. “Women that would probably never meet under any other circumstances get a chance to come together with one common bond.”

No matter their race, preference, background, or experience, the sport brought a special bond to all those that play it.

“I haven’t been on skates since I was six years old,” said Laurie Mellors, Pissed-Off Jam Shaft, a player originally from New Jersey. “Once you get the hang of it, it’s a lot of fun.”

Originally Jinx wanted the name of her team to be the Valdosta Vixens, but a team in Vero Beach already had the name.

Because roller derby does not allow team name repetition, Jinx settled for the next best thing, the Valdosta Venom, with a king cobra as their icon.

The interesting nicknames are meant to represent each different personality.

Corriell chose the name Bernie Wreckster to serve as a mix between retro and pin up to portray her personality and look.

“You will know your nickname once you find it. It will just fit,” said Jinx.

Although the team has yet to play, they practice hard. The ladies all carpool to a skate rink in Douglas for two hour practices.

“I coach these girls myself,” Jinx said.

Most people think there’s nothing to the game other than to aim and hit, but during these practices, Jinx drills her girls on the techniques and skills that go into this sport.

During practice, the team works on different drills, like the shopping cart. In this drill, three skaters line up and hold on to one another. The skater first in line eventually breaks off and must skate around the rink one full turn before catching back up with her two teammates. This continues until everyone has had a turn.

The girls also practiced “T-stops’, angling their skates into a T to make a sudden stop.

Other than skating, the girls learn how to hit, fall, and block to avoid major injuries.

Bruises and bumps come with the sport, but if you don’t know the techniques and methods on the basics you can harm yourself severely.

Roller derby is a full contact sport and can be a bit aggressive, a little less aggressive than hockey or football.

Half way through a practice, Jinx yells, “Yay! Nobody puked!”

The ladies of Valdosta Venom gave insights on their pre-game techniques.

Some may rough each other up while others, like Pissed-Off Jam Shaft, sit back and listen to music until it is time to play.

Some even paint their faces to look tougher while others stretch and get in their zone.

“It’s really amazing how big the fan base and the type of people that are in to watching,” said Ashle’ Suttles (Foul Pacino), “Guys love it.”

Foul Pacino also explains how older men walk up to her to see when their next bout (game) is.

No matter the distance, other leagues go out and support each other as well. Even rivalries seem to get along after it is all said and done.

With Go Waiter being Valdosta Venom’s main sponsor the monthly dues are kept low at only $35 a month. This covers the cost to rent rinks for practices.

Boys can be officials or volunteers in the all-female sport, and it only requires the will to gain knowledge of the sport and monthly dues of $25.

The male refs get to pick nicknames too.

Ben Skender, VSU student, goes as Skender Bender while in the rink.

Gear, consisting of skates, pads, a helmet and mouth guard, depending on the quality and quantity, can be rather pricey, about $200 or more.

Valdosta Venom has rink practices every Sunday and endurance practices a couple of times a week starting Feb. 26.

There is no experience needed and all shapes, sizes and fitness levels are welcome. Everyone is invited to come and watch a practice.

“What I tell people when they message me is to just come check out a practice,” Jinx said. “If you think about it too much, you probably won’t stick with it. You either get bit by the derby bug or it’s not for you.”