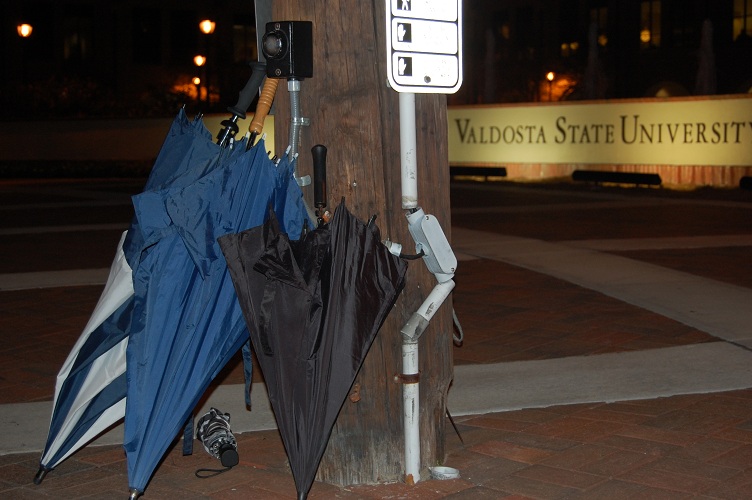 William Mathews didn’t expect his Friday evening plans, a trip to a local coffee house, would land him in a jailhouse and cost him $1,000.
�
Mathews, a senior psychology major, was arrested Friday evening at 7:40 pm, and charged with theft by taking.  The item he was charged with stealing: a large black and white striped VSU umbrella.

According to the VSUPD police report, arresting officer Yolanda Calhoun saw Mathews taking an umbrella that was not his. Mathews disputes those facts.

“I picked up an umbrella that was part of a stack at the cross walk at Baytree and Oak,” Mathews said. “I put the umbrella back down and walked across the street with my friends.”

Mathews said that after he crossed the street, he turned back around and saw that Calhoun, who was sitting at the red light, was on her police radio.

Mathews and his friends were walking across the Oak Street parking lot when they saw a different VSU police car pulling into the lot.

According to Mathews, the second police car was driving furiously through the parking lot, swerving around, cutting close to cars.

“We all kinda scattered out a little bit,” Mathews said.

He ran toward Sustella, partly because of the rain, but mostly because he was freaking out.

Mathew said that this second VSU police officer followed him to Sustella. When he got there, Mathews approached the officer to ask why he was being chased.   The police officer said that running could get him shot, because he looked suspicious, Mathews said.

He asked what he was charged with.  Mathews was told he was being charged with theft by taking.

“I didn’t have the umbrella on me,” he told the officers. “What you charged me with, I don’t have.”

“As I stood there, I was embarrassed,” Mathews said.  “I have never been arrested. There are no charges on my record. I don’t even smoke, because my father died of lung cancer, when I was 13.”

When Calhoun arrived at the scene, she put Mathews in handcuffs, put him in the police car, and drove him to the Lowndes County Jail.

When the Lowndes County officers questioned Mathews about what took place, they joked about why Mathews was arrested.

“They said it was petty,” Mathews said.  “They couldn’t believe I was arrested for this.”

Mathews said he was released five hours later on $1,000 bail. He walked to McDonalds on Patterson Street around 1 a.m. in the morning to call someone to come pick him up.

A court date was set for May 8. Mathews plans to fight the charges.

“If I really wanted to steal an umbrella, I could have taken that thousand dollars and bought all of the umbrellas in the bookstore,” Mathews said. “I didn’t have to steal one.”

The arresting officer was contacted by the Spectator, but was not available for a comment at the time of publication.