Home / Campus Life / Guns for Hire: punk with a ‘twang’ 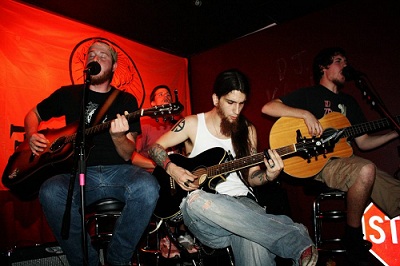 Guns for Hire: punk with a ‘twang’

Two VSU students have aimed to make a name for themselves with their band “Guns for Hire.”

The band consists of four members.

Lead singer Cody Gibson, a junior mass media major, plays guitar and writes some of the band’s songs along with Hunter Gregg, a sophomore biology major.

Johnathon Miller is the lead guitarist, and Luke Morgan plays as drummer.

Morgan and Gregg both played in two other bands together prior to Guns for Hire.

Gibson formed the band in January on his own.

He got the idea for the group name from a song by Bruce Springsteen titled “Dancing in the Dark.”

In the song, there’s a line that says, “This gun’s for hire even if we’re just dancing in the dark.”

The band has performed at places such as Blue Pub, 6 Shooters Saloon and Mellow.  They also play at private parties and biker rallies.

Gregg and Gibson described their sound as being “cow-punk.” This is punk music with a “twang.”

According to them, famous bands that also fall under this category are Social Distortion, Flat Tires, Lucero and Drive-By Truckers.

The band’s influences vary depending on the member. Some like Machine Head, Pantera and Primus, and some like Hank Williams.

Guns for Hire has a mixture of songs with topics ranging from relationship issues to violence.

The band said that their lyrics are more like stories than typical song lyrics.

One of their favorite parts about performing is the fact that people actually know some of their songs.

“It’s fun to have people singing along,” Gibson said.

Gregg agreed that one of the benefits was fame.

They hope to one day begin touring and get their music out to more of the public.

These four brothers feel passionately about what they do as they love the rebellious nature of their music.

Gibson has one thing to say about it.