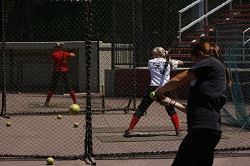 The Blazers come back to earth heading into the post-season

The No.1 Valdosta State Blazer softball team is very capable of winning a national championship as long as they remember to keep their “eye on the prize.”

A familiar phrase said by senior ace Alanna Hadley was used to describe her team trying to achieve their ultimate goal.

The regular season is over and the post-season begins with the 2012 Gulf South Conference.

Despite Delta State snapping their 36 game-winning streak during last Sunday’s finale, the Blazers plan to rejuvenate from the loss bringing them back to earth.

Senior Marti Littlefield agrees that her team will use the defeat to benefit them entering the climax of the season.

“We needed it,” Littlefield said. “It was an eye opener. We just felt unstoppable and to lose like that it showed us you never know what can happen.”

The Blazers will travel to Mississippi as they attempt to claim their 4th GSC title straight.

The three-time defending champs face West Georgia first in the quarterfinals of the GSC tournament.

This season the Blazers have outscored the Wolves 39-8 and won all four meetings.

Head Coach Thomas Macera, who recently was named GSC Coach of the Year, is a fond believer that statistics doesn’t mean much when tournament time comes around.

“We can’t look past anybody. Anybody can beat anybody on any given day in baseball or softball. You have to show up. As good as a hitting team that we are, if we don’t hit we lose,” Macera said.

If the Blazers manage to win another consecutive conference title, there is no doubt that they’ll have enough momentum to win the national tournament.

UGA transfer Hadley, who was 22-2 in the regular season, was a key addition to this year’s squad and the Blazers will need her to continue to have great outings if they want to make a run.
�
“We have to come to play every game and perform with pitching, defense, and hitting. We can’t look down the road to the championship,” the GSC pitcher of the year, Hadley said. “If we do that, I feel confident in myself and the girls that can win.”

Freshman phenom Courtney Albritton lead the conference in runs scored this season and her firepower will make a difference.

Luckily, the Blazers return seven players who were apart of the 2010 team that made it to the Big Dance.

VSU has been ranked No.1 the past five weeks and players especially the seniors know how important gaining momentum is heading in the postseason.

VSU now finishes the regular season (42-3) (26-1) and is prepared for their next opponents they’ll compete against on their path to their ultimate goal which isn’t winning another conference title.

“This team has enough ability to win a national championship,” said Coach Macera. “It’s a great group of girls, it’s been a great year, it’s been a lot of fun, and hopefully it’s not over yet.”