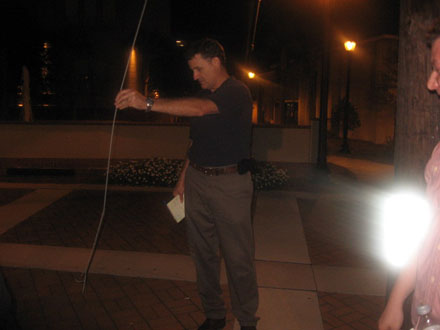 VSU officials, Student Government Association representatives and the VSU police chief all partook in a walk through campus Wednesday night in order to address concerns about campus lighting.

The walk started at West Hall and ended in front of the Education Building where new lights where new LED lights have been installed.

The LED lights provide clearer resolution in darker areas, are environmentally safer and cost less for the school to maintain each year.

New lights were placed in front of the Education Building after lighting was deemed too dark during last year’s walk through.

“LED lights are a better alternative than the lights we had last year,” said Meredith Lancaster, Environmental Safety Coordinator here at VSU.

The walk was mentioned in last Monday’s SGA Meeting.

Comptroller Hassanat Oshodi was one representative of SGA to walk along to see the route that officials traveled.

Michael Fontaine, VSU’s Occupational Health and Safety Coordinator found an exposed electrical wire on the crosswalk on N. Oak Street in front of the student union that could pose a hazard to student’s safety.

Ms. Lancaster noted every hazard found and also mapped the root traveled during the walk.

Darkness around campus was found not a real issue this year during this walk.

Ms. Lancaster was not aware of any new dimly lit areas on campus.

“There are no recommendations yet for this year for new lights on campus,” said VSU’s Director of Environmental Safety Bob DeLong. “Reports have not been made yet for this year’s walk and won’t be finished.”