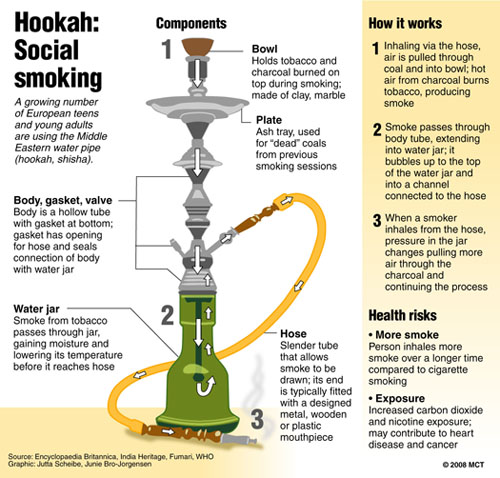 Hookahs are an all-natural tobacco mixed with honey, molasses and fruit extract and is flavored with different scents.

Recently, hookahs were found have some of the same health issues as smoking cigarettes.

According to the Centers of Disease Control and Prevention, hookah is no safer than cigarettes. Even after being passed through a water filter, hookah still contains harmful chemicals including carbon monoxide, heavy metals, and carcinogens.

Charcoal that is used to heat the tobacco can cause the smoker to inhale more carbon monoxide and metal than that of someone who smokes cigarettes.

Many of those who do smoke from the water pipe are aware of the health effects caused by smoking the flavored tobacco.

“Hookah can be harmful to your lungs, obviously, but especially to your heart,” said Ivan Morales, junior psychology major. “After all, it is tobacco.”

When asked about the hookah community at VSU, Morales says almost everyone that he knows smokes hookah at least once a month, if not more often.

“Both have their perks,” Davis said. “While hookah isn’t something I can take with me everywhere, it definitely puts me in a more relaxed state of mind which makes it worth the extra work when I get home.

“Cigarettes however, don’t have as much of an effect, but I buy a pack every now and then as backup for when I’m on the road or in town,” Davis said.

Although Morales and Davis are aware of the effects, the social setting makes it acceptable to them.

Vendors of hookah agree with both Morales and Davis.

Chris Matuszczak, one of the owners of “Smoking Aces”, a hookah lounge in downtown Valdosta, and Alex Abell, a co-owner at “Divided by Zero”, a novelty shop on Baytree Road believe that hookahs are not as harmful as cigarettes.

“Cigarette smokers would argue that hookahs are more dangerous because you can smoke for an hour and you can smoke a cigarette in ten minutes,” Matuszczak said. “Yet cigarettes contain more chemicals and toxins that companies throw in.”

“Hookah smokers would say cigarettes are worse, because they have all the chemicals and hookahs only contain .05% nicotine, is filtered through water and has absolutely no tar.”

Smoking Aces, according to Matuszczak, is filled with VSU students on weekends.

Abell says the sales of hookah related materials at Divided by Zero are high.

“I think hookahs and its materials are our best sellers,” Abell said. “It’s popular among the students.”

Abell was not aware of the CDC’s findings on hookahs, but when informed, he downplayed the findings.

“Why would you inhale something like that?” Ruppel said.  “It’s harmful to your health. Why would you want to spend your time inhaling toxins with your friends? I just don’t agree with it at all.”