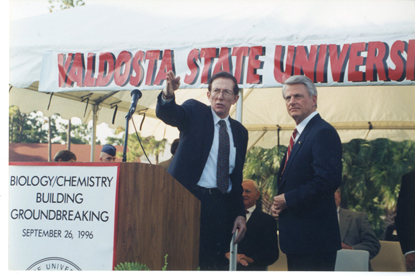 Dr. Hugh C. Bailey, who served as president of Valdosta State as long as most traditional college students have been alive, died on Oct. 5 at the age of 83.

Dr. Bailey began his presidency in 1978 when VSU was still called Valdosta State College and retired in 2001 from Valdosta State University. During his time here at VSU Bailey supported, funded and created lasting memories with students and faculty.

Dr. Bailey was a father, husband, friend, president and leader.

Bailey’s achievements and involvement with staff members is recognized across the VSU campus.

“Dr. Bailey was an excellent leader with a clear vision for the university,” Frank Barnas, head of the mass media department, said.

“What he understood and what people really undervalued was how important it was to elevate this university even though we weren’t in Atlanta,” he said. “Building a university of this caliber in South Georgia against what is perpetually the leadership in Atlanta was a monumental feat and we were very lucky to have him leading us.”

New students to VSU recognize Bailey as the name printed on the front of the science building, but to the staff and professors, it means much more.

Dr. Thomas Manning, chemistry professor, is thankful for one of his greatest achievements that was funded and supported by Dr. Bailey. Ten years ago, Dr. Manning worked with Bailey to patent a substitute for a chemical process.

“I still have an award on my wall for it given to me in merit from him.” Dr. Manning said.

“I am proud that his name is on the building yeah, but that’s kind of superficial, getting the money for it, that was a big honor for us.”

“I have lost a father figure; a mentor; an adviser; and, most of all, a wonderful friend,” Golden said in a university press release Oct. 6. “I will miss his quick wit and his smile. I thank God that Hugh Bailey came my way.”

There will be a memorial service for Dr. Bailey at 3:30 p.m. on Friday in Whitehead Auditorium.